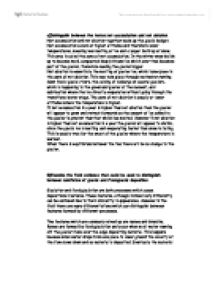 a)Distinguish between the terms net accumulation and net ablation Net accumulation and net ablation together make up the glacial budget. Net accumulation occurs at higher altitudes and therefore lower temperatures, meaning less melting of ice and a larger build up of snow. This area is called the zone of net accumulation. In the winter snow builds up to become nev(, compacted deeply frozen ice which over time becomes part of the glacier, therefore making the glacier bigger Net ablation is essentially the melting of glacier ice, which takes place in the zone of net ablation. This may take place through meltwater running down fluvio-glacial rivers, the calving of icebergs on coastal glaciers, which is happening to the greenland glacier at the moment, and sublimation where the ice directly evaporates without going through the transitional water stage. The zone of net ablation is usually at lower altitudes where the temperature is higher. ...read more.

They occur when a glacier begins to retreat, meaning the velocity of the ice drops and so material begins to be dragged along rather than moving with the glacier. Drumlins are mounds of glacial moraine which the glacier deposits whilst it is still moving. The glacier shapes the moraine leaving a steep sloping stoss end and a steeper sloping leeward end. This leaves a hill which is similar in shape to an upturned spoon. Kames look like circular mounds which are missing the tapered end of a drumlin. They are 10-20m high and can be up to 50m long. They occur at the edge of ice sheets where the glacier has melted away to leave the kame. Kames are not usually found close to each other. Drumlins however are usually found in clusters or 'baskets of eggs'. They are found at the base of glacial valleys as they are usually formed by valley glaciers. ...read more.

Outwash plains and ground moraine are another two features which can be hard to distinguish between in the field. Both are similar since both are features often not recognisable to the untrained eye due to their scale. Outwash plains are usually many square kilometres in area. They are formed when streams of melt water from a glacier deposit the material they are carrying onto the ground on a flat area. This moraine and till builds up making the area very fertile. Outwash plains are found in the Svalbard area of Norway. Ground moraine is very similar but is formed by moraine deposited by ice sheets rather than melt water streams. Areas of ground moraine are usually made of till and also create fertile land which is now popular for farming. Ground moraine is deposited over regions of land, such as East Anglia. In the field outwash plains may have streams crossing them and are generally flat. Ground moraines however create a gently rolling topography and may have features such as drumlins on the surface. ?? ?? ?? ?? ...read more.