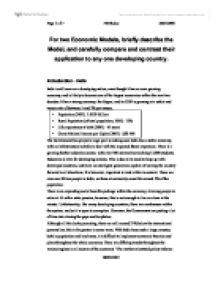 For two Economic Models, briefly describe the Model, and carefully compare and contrast their application to any one developing country.Introduction - India

For two Economic Models, briefly describe the Model, and carefully compare and contrast their application to any one developing country. Introduction - India India is still seen as a developing nation, even though it has an ever growing economy, and is likely to become one of the largest economies within the next two decades. It has a strong currency, the Rupee, and its GDP is growing at a stable and secure rate of between 5 and 7% per annum. * Population (2001): 1.0329 Billion * Rural Population (of total population, 2001): 72% * Life expectancy at birth (2001): 63 years * Gross National Income per Capita (2001): US$ 460 The Government has played a large part in making sure India has a stable economy, with an infrastructure suitable to deal with the expected future expansion. There is a growing further education sector, with over 300 universities teaching 12,000 students. Education is vital for developing nations. This is due to its need to keep up with developed countries, and have an intelligent generation capable of moving the country forward in all directions. It is however, important to look at this in context. There are over one Billion people in India, so those at university count for around 1% of the population. ...read more.

Then in the 1850's, the US took off, and in 1910 Japan followed, with Mexico starting up in the 1940's. It takes a long time for those countries who have not yet taken off to reach the required point, as due to technological advancements, the starting posts are moving. Again, it is important to remember that this is a simplified version of the truth, and in reality, these stages are hazed, and there may be intermediate stages some economies must go through before they can reach the required pattern Rostow produced. This may be needed in such economies that have experienced communism for several decades, and must adapt to the capitalist world it has found itself in, for example, Russia in the early 1990's, and more recently, china. However, China is taking a slow and steady movement into capitalism to avoid any major recession that may cripple the economy for generations. 'One of the strategies necessary for any takeoff was the mobilisation of domestic and foreign saving in order to generate sufficient investment to accelerate economic growth.4' Put simply, traditional society is where all employment is subsistence with little to no savings, and the age of high mass consumption is where living standards are increased for all. ...read more.

Aside from that, India seems to have evolved from a subsistence country to one who now makes enough food it can export any excess. This allows for investments to be made, and hence travel towards development. This is the theory behind Rostow's work, with countries moving along a path to development. It can be argued that the flaw in Rostow's methods of current developing nations not the same as current developed nations, falls down when the example if India is brought into context. Again, this is due to India previously been a colony of a now developed nation. The major flaw in Rostow's work doesn't allow for the increased consumption that would come with India moving along the five stages of development. Although India may well develop in the next few decades, not every developing nation will achieve such levels, if theory and common sense were to be used together. Also, as Dr Vsrs points out, the model does not allow for India's 'fairly high level of tangible wealth / intelligentsia as well as intangible social and economic disparities.8' Therefore, it is safe to say that the model suggested by Ricardo is better suited to the economic structure and workings of India than Rostow's is, for the reasons outlined above. ...read more.