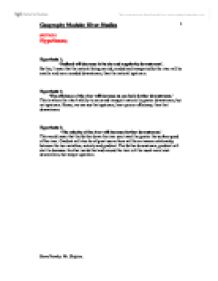 Geography investigation - The River Skirfare located in the Littondale region in the Yorkshire Dales National Park.

It is these two that create the larger more angular sized material and hence occur more frequently upstream. Following these processes are attrition and corrosion. These occur more frequently downstream where there is greater energy. It is this processes that round off the material making it less angular. Attrition, as shown in the diagram is the collision of material within the river. Corrosion is the chemical reactions that occur between the river water and the material- this erodes the material down. The importance of the amount of energy must not be under-estimated in referring to this hypothesis. More will be made of this later but, the essence of this principle is that more erosional processes take place downstream where there is a greater amount of energy for them to occur, and less occur upstream where there is not as greater amount of energy. Linked with this hypothesis is the third and last hypothesis concerning velocity. All three will be brought together in the conclusion which follows this section. * 'The efficiency of the river will increase as you look further downstream.' The data for this section was by far the largest with a vast collection. There was the Cross-sectional Area, Wetted Perimeter and the Hydraulic radius. Within this hypothesis there is a great deal of processes. These will be dealt with as they come up through looking at the various data in no particular order. Defining efficiency is the best starting point to understanding the following explanation of results and processes involved in them. A rivers efficiency is simply how good it is at overcoming the forces of friction that are placed upon it. Hence, the processes to be concerned with in this section while analysing results are the processes or factors that will affect friction on the river. The cross profile of a river shows much about how well the river can overcome the forces of friction. There are various cross profiles attached to this investigation. However one of these can be seen on page 1 1 Geography Module; River Studies Steve Newby. Mr. Shipton. ...read more.