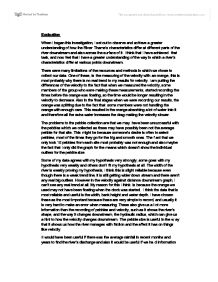 Evaluation When I began this investigation, I set out to observe and achieve a greater understanding of how the River Thame's characteristics differ at different parts of the river downstream and also across the surface of it. I think that I have achieved that task, and now feel that I have a greater understanding of the way in which a river's characteristics differ at various points downstream. There were many limitations of the resources and methods in which we chose to collect our data. One of these, is the measuring of the velocity with an orange, this is most probably why there is no real trend to my results for velocity. I am putting the differences of the velocity to the fact that when we measured the velocity, some members of the group who were making these measurements, started recording the times before the orange was floating, so the time would be longer resulting in the velocity to decrease. Also in the final stages when we were recording our results, the orange was splitting due to the fact that some members were not handling the orange with enough care. ...read more.

My reason for this I think is because the orange we used may not have been floating when the clock was started. I think the data that is most reliable and useful is the width, bank height and water depth. I have chosen these as the most important because these are very simple to record, and usually it is very hard to make an error when measuring. These also give us a lot more information than the recording of pebbles and velocity, such as it shows the river's shape, and the way it changes downstream, the hydraulic radius, which can give us a hint to how the velocity changes downstream. The pebble size is useful in the way that it shows us how the river manages with friction and the affect it has on things like velocity. It would have been useful if there was the average rainfall in recent months and years to find the river's discharge and also it would be useful if we had information on how often the river floods usually. This information would have helped me explain the outliers in the pebble size because the load gets increased in floods as the banks get worn away and eroded. ...read more.

I could have improved my investigation in many ways for example to measure the velocity, it would have been sensible to take more oranges to measure velocity, and then we may not have had many differences due to the orange. Also in the timing, it would have been better if every time that we were measuring the velocity that we made sure that the stopwatch was not started until the orange was fully floating. Some things such as velocity can be measured by computer devices, so if I had the chance I would have got information from a computer that would measure the velocity of the river a number of times, over a long period of time. These can help us as unlike humans, computers don't get tired and they are very accurate in there results. I would have carried out the trial a lot more times if I had the chance again. The collection of pebbles could have been done a lot better in the way that people should not have picked the best looking pebble but looked away and picked a pebble at random. If I could, I would collect more many more pebbles and measured them and then the accuracy of my results would be increased. ?? ?? ?? ?? ...read more.