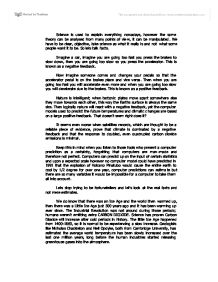 Science is used to explain everything nowadays, however the same theory can be analysed from many points of view, it can be manipulated. We have to be clear, objective, take science as what it really is and not what some people want it to be. So lets talk facts. Imagine a car, imagine you are going too fast you press the brakes to slow down, then you are going too slow so you press the accelerator. This is known as a negative feedback. Now imagine someone comes and changes your pedals so that the accelerator pedal is on the brakes place and vice versa. Then when you are going too fast you will accelerate even more and when you are going too slow you will decelerate due to the brakes. This is known as a positive feedback. Nature is intelligent; when tectonic plates move apart somewhere else they move towards each other, this way the Earths surface is always the same size. Then logically nature will react with a negative feedback, yet the computer models used to predict the future temperatures and climatic changes are based on a large positive feedback. That doesn't seem right does it? ...read more.

Carbon Dioxide forms only .037% of the atmosphere, for it to be dangerous it would have to be at least 1.5%. These levels could not be reached even if we burned all the existing fossil fuels, take into consideration that of that 0.037% we only make a 3% of it, so calculate the 3% of 0.037, its not even worth mentioning. Even if it weren't used up CARBON DIOXIDE has a life span of only 20 years so the carbon footprint we leave now will no longer be there in 20 years time. The evidence shown in the increase of global temperatures demonstrates that during the post war industrial boom unprecedented amounts of man-made carbon dioxide were being emitted into the atmosphere by factories, cars, and power plants yet from 1940-1975 the earth was cooling; this is more adequate to the 1500 years climate cycles. CARBON DIOXIDE therefore is not a cause of global warming. But lets analyze further the real scientific facts. While ground-level temperature measurements suggest the earth has warmed between 0.3 and 0.6 degrees Celsius since 1850, global satellite data, the most reliable of climate measurements, show no evidence of warming during the past 18 years. ...read more.

What does all this mean? It means Earth's rotation changes every year and unless someone has kept 100,000 years of historical records we don't know exactly what to expect. 97% of the heat in the atmosphere gets there either through convection or evaporation, not greenhouse gases. Water evaporation is a bigger cause of global warming than carbon dioxide as even the main greenhouse gas is water vapour, being a 95% of the greenhouse gases. Water vapour is controlled by the worldwide balance between evaporation from the oceans and precipitation; human activities have little control over this. Small changes in the atmospheric levels of water, in the form of vapour and ice crystals can contribute to significant changes to the temperature of the Earths surface, just a rise of 1% of water vapour could raise the global average temperature of the Earths surface by more than 4 degrees Celsius. Nature decides how global warming happens based upon climate sensitivity, net radiative forcing, and oceanic storage of heat, not on the type of multi-decadal time scale variability which has been discussed by followers of the global warming mania. As the worldwide famous magazine "The Economist" declares when talking about the manipulated algorithms and false proofs used by scientists of the Climate Research Unit, the UK central for global warming research, "sceptics should not be silenced" as "there is no doubt that politics and science make uncomfortable bedfellows". ...read more.