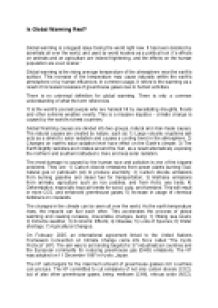 ﻿Is Global Warming Real? Global warming is a biggest issue facing the world right now. It has been debated by scientists all over the world, and used by world leaders as a political tool. It?s effects on animals and on agriculture are indeed frightening, and the effects on the human population are even scarier.? Global warming is the rising average temperature of the atmosphere near the earth's surface. This increase of the temperature may cause naturally within the earth's atmosphere or by human influences. In common usage, it refers to the warming as a result of increased releases of greenhouse gases due to human activities. There is no universal definition for global warming. There is only a common understanding of what the term references. ?It is the world's poorest people who are hardest hit by devastating droughts, floods and other extreme weather events. This is a massive injustice - climate change is caused by the world's richest countries.? Global Warming causes are divided into two groups, natural and man-made causes. ...read more.

As the earth temperature rises, the impacts can fuel each other. This accelerates the process of global warming and causing runaway, irreversible changes, being: 1) Rising sea levels; 2) Extreme weather; 3) Economic Effects; 4) Disease; 5) Loss of Species; 6) Water shortage; 7) Agricultural Changes. On February 2005, an international agreement linked to the United Nations Framework Convention on Climate Change came into force called ?The Kyoto Protocol? (KP). The aim was to set binding targets for 37 industrialized countries and the European community for reducing greenhouse gas (GHG) emissions. The KP was adopted on 11 December 1997 in Kyoto, Japan. The KP sets targets for the maximum amount of greenhouse gasses rich countries can produce. The KP committed to cut emissions of not only carbon dioxide (CO2), but of also other greenhouse gases, being: methane (CH4), nitrous oxide (NO2), hydro fluorocarbons (HFCs), per fluorocarbons (PFCs), sulphur hexafluoride (SF6). ?Many scientists say that the targets set in the KP are only scratching the surface of the problem. ...read more.

This doesn?t mean that the Earth?s temperatures haven?t fluctuated within different parts of the world, or between different seasons and times of day. But, by calculating the world?s average all over temperature over the course of a year, we can see that temperatures have been moving up. Global warming is a complex issue, and there are many uncertainties in its outcomes. It may appear that the earth is already ruined when bearing in mind the numbers of greenhouse gases are already in the air, however, every step we make towards a green lifestyle, along with the efforts of others will have a significant impact on the future of the planet. Once again, the definition of global warming is any increase in the Earth?s temperature. It can solely be a result of natural occurrences, rather than human activities. Every science person would have to keep an open mind, when asked about possibility of human impact to global warming, and say yes, it is possible. ...read more.