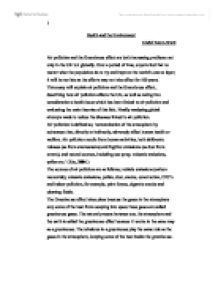 Health and the Environment

Air pollution and the Greenhouse effect are both increasing problems not only in the UK but globally. Over a period of time, experts feel that no matter what the population do to try and improve the world’s ozone layer; it will be too late as the efforts may not take effect for 100 years.

Air pollution is defined as; ‘contamination of the atmosphere by substances that, directly or indirectly, adversely affect human health or welfare. Air pollution results from human activities, both deliberate releases (as from smokestacks) and fugitive emissions (as dust from streets), and natural sources, including sea spray, volcanic emissions, pollen etc.’ (Liu, 2004.)

Man-made activities also produce greenhouse gases, these are increasing, the main sources are; fossil fuels, cutting down and burning trees, and chlorofluorocarbons (CFC’s). As more of these gases are trapped in the atmosphere the earth becomes warmer. This is known as global warming.

In both developed and rapidly industrialising countries, the major historic air pollution problem has typically been high levels of smoke and sulphur dioxide arising from the combustion of sulphur-containing fossil fuels such as coal for domestic and industrial purpose. Air pollution in the UK has been a recognised problem as far back as the 13th Century, when the use of coal in London was prohibited on the ground that it was causing harm to health. During the Industrial Revolution, smog pollution in urban areas became a significant problem, due to the industrial and domestic burning of coal. Today, both urban and rural smog pollution results from the build up of secondary photochemical pollutants such as ozone. Whilst air quality has generally improved over the last 100 years, legislative controls and the introduction of further low emission technology will help to reduce air pollution in the UK still further.

Air pollution and asthma are suggested to be linked. Asthma affects more than 3 million people in the UK. It can occur in people of any age, but it is most likely to develop in children by the age of 5 and in adults during their 30s. Asthma affects the airways and disrupts the transport of air in and out of the lungs. Sufferers have sensitive airways which become inflamed and narrowed under certain conditions. The inflammation is caused by the body’s immune system, in order to counteract the irritant. When inflammation occurs it becomes difficult for oxygen to reach the lungs. Consequently asthmatics may experience difficulty in breathing. Numerous factors can be responsible for triggering an asthma attack. Asthmatics are usually allergic to more than one trigger and their asthma

symptoms may vary from wheeziness, to shortness of breath, chest tightening or over production of mucus.

Both indoor and outdoor air pollution, natural and man-made, can trigger asthma attacks. A BBC article 16 Sept 2003 showed that a study carried out in Birmingham of people living near an iron foundry found that the number of patients admitted to hospital with asthma fell by 30% after the foundry cut emissions. There is a growing debate on whether there is a link between air pollution and asthma. A number of studies have suggested a link, others have not. For instance, according to the article ‘asthma rates have soared in Britain since the introduction of the clean Air Act 1956, which significantly cut air pollution across the country. A spokeswoman for The National Asthma Campaign said ‘Many asthma sufferers say pollution triggers their asthma.’ ‘However, there have been very few specific studies which have shown that air pollution causes asthma. It is difficult to prove.’ (BBC Health online (16th Sept 2003)). Adrian Bauman (1996) suggested that epidemics of asthma may yield clues to causal agents. A report of an epidemic in east Birmingham 1987, showed that between 14 September and 7 October, 86 children meeting the case definition of asthma (reversible wheeze, reversible dyspnoea, or tachypnoea with wheezing) were admitted to Birmingham Heartlands Hospital, a rate 3.58 times higher than that in the preceding four weeks and 3.4 times higher than that in the same period of 1986.    Local meteorological data and pollution data for the period 1 August to 5 October showed that the largest single fall in mean air temperature between days (3.9°c) occurred on 13 September, the day before the start of the increase in admissions; it was accompanied by reduced humidity and increased barometric pressure but no rain and no relevant changes in monitored pollution levels. Another example of air pollution being linked to asthma was reported on 12th March 1999. When evidence found the link to children and asthma. Experts tested 632 children’s breathing aged 7-11 years. They found that respiratory disorders worsened as air pollution increased. The children were split into four groups; Bronchial hyper-responsiveness, Allergies, neither and both. Both children from rural and urban areas were asked to keep a diary of their symptoms and tested their lung capacity 3 times a day. Data was collected from 459 children, it showed that 119 had bronchial hyper responsiveness and allergies when air pollution was high; therefore they were more likely to suffer asthma related problems.  When there were more particulates - pollutants larger than 10 micrometers - in the air, these children were up to 139% more likely to suffer, and when there were more of the pollutants that make up car exhaust fumes - black smoke, sulphur dioxide and nitrogen dioxide - they were up to 131% more likely to have such symptoms. (BBC health online (1999)). Although there is evidence to suggest that air pollution does worsen asthma, Douglas Carnall (1995) argues that there is no good evidence to suggest this… he says ‘Current levels of air pollution play only a small part in exacerbating existing asthma.’ He continues ‘Epidemiological surveys show no association between the prevalenceof asthma and areas with higher levels of airpollution, butfive studies have shown a moderate and consistent correlationbetween asthma and exposure to traffic. It is possible; however,that social class and reporting bias may have confounded theseresults.’

There are a greater number of studies shown to link asthma and air pollution than there is to prove it has no effect, the main theories to suggest that asthma is on the increase all relate to 3 main factors; Genetic, environmental and allergenic factors. The genetic theories of asthma attempt to explain asthma as a genetic/inherent condition. Lebowitz (1984) argues that children with asthmatic parents are more likely to inherit the condition than those with non-asthmatic parents. The environmental theory says the effects of air pollution are diverse and numerous. Contamination of the atmosphere by man made and natural pollutants has led many to suggest that the rise in asthma positively correlates with the release of pollutants into the atmosphere. Allergenic factors relates to the different triggers that affect asthma sufferers, these vary depending on the time of year, weather and other allergies.

The London Smog Disaster occurred in December 1952. London experienced a cold period therefore a large amount of coal was burnt resulting in smoke bellowing from the chimneys. Light winds and moist air were the ideal condition for fog, which thickened and lasted for a few days, this mixed with the smoke and soot, causing the smog disaster. In central London the visibility remained below 500 meters continuously for 114 hours and below 50 meters continuously for 48 hours. Road, rail and air transport were brought to a standstill. The smoke laden fog that covered London brought the premature death of an estimated 12.000 people and illness to many others. The deaths which resulted from the smog can be attributed primarily to; pneumonia, bronchitis, tuberculosis and heart failure. It was reported that people with bronchitis and asthma died in their beds from suffocation because of the smog. The death rate remained above normal through the winter and was still 2 per cent up the following summer. In the weeks that followed, the medical services compiled statistics and found that the fog had killed 4,000 people—most of whom were very young or elderly, or had pre-existing respiratory problems. Another 8,000 died in the weeks and months that followed.  This disaster was enough evidence to suggest that air pollution does cause illness or even death.

It was in 1956, the Clean Air Act was introduced, it was directed at domestic sources of smoke pollution – authorised local councils to set up smokeless zones and grants were introduced to encourage householders to convert from coal fire to smokeless coal to electricity. In 1991 London experienced a repeat of the 1952 smog this caused an extra 160 deaths for the time of year. In 1968 the Clean Air Act; tall chimneys was introduced, this Act brought in the basic principal for the use of tall chimneys for industries burning coal, liquid or gaseous fuels. The problem with this Act was the scrubbers/filters which absorbed the chemicals had to be disposed of into landfill sites, therefore the chemicals were been out back into earth, eventually seeping through the soil and back in to the atmosphere.

1St January 1989 saw the introduction of the Montreal Protocol. The main aims of this protocol was to get whole countries legally bound to reduce and eventually phase out all together the use of CFC’S, also to decrease the use of chemical compounds destructive to the ozone in the stratosphere by 50% by the year 1999. As scientific of the processes of chemicals that destroy the ozone layer has grown, the number of countries signing the protocol had increased to 96 by 1996. In the meantime, several amendments have been made. (Ashton.J, Laura.R (1999) pp 28.) The Kyoto Protocol became a legally binding treaty on 16th February 2005. It could only come into force after two conditions had been fulfilled, these were; It had been ratified by at least 55 countries and it had been ratified by nations accounting for at least 55% of emissions. The two main countries which have not ratified are Australia and USA; this is because the countries leaders believe that lowering their emissions will affect the economy of the country. The main aim of the Kyoto Protocol is to make countries cut their emission levels by various percentages depending on the country. The UK has committed itself to a 12.5% reduction, although it has already set its own domestic target of a 20% reduction in carbon dioxide by the year 2010.

Whilst the Kyoto protocol is a very good attempt to reduce emissions, there has been a significant change in emission levels but until America and Australia agree to it there will never be any improvement in the ozone layer as these 2 countries are the biggest polluters in the world. Therefore no matter how many Kyoto protocols there are, the ozone layer will never be completely regenerated.