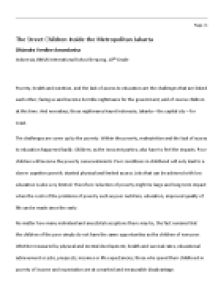 ﻿________________ Page | The Street Children Inside the Metropolitan Jakarta Dhiandra Verdine Amandanisa Indonesia, BINUS International School Serpong, 10th Grade Poverty, health and nutrition, and the lack of access to education are the challenges that are linked each other, facing us and become horrible nightmares for the government, and of course children at this time. And nowadays, those nightmares haunt Indonesia, Jakarta ? the capital city ? for exact. The challenges are come up by the poverty. Within the poverty, malnutrition and the lack of access to education happened badly. Children, as the innocent parties, also have to feel the impacts. Poor children will become the poverty conservationists. Poor conditions in childhood will only lead to a slower cognitive growth, stunted physical and limited access. Jobs that can be achieved with low education is also very limited. Therefore reduction of poverty might be large and long-term impact when the roots of the problems of poverty such as poor nutrition, education, improved quality of life can be made since the early. No matter how many individual and anecdotal exceptions there may be, the fact remains that the children of the poor simply do not have the same opportunities as the children of non-poor. ...read more.

The poverty of children exposed in the amount of information street children, dropped out of school, malnutrition, child prostitution, children trafficking and child labor. The possible causes of the child poverty that related to the health and nutrition of the children and the lack of access to education are 1) the low wages, contrary to some stereotypes, 56% of children in poverty have a parent who works full-time, according to Robert Fellmeth, Price Professor of Public Interest Law at the University of San Diego School of Law and executive director of the Children's Advocacy Institute. A full 28% have parents who work part-time and only 16% of parents are unemployed. Generally these parents work in low-wage jobs with few benefits and no room for advancement. Though parents work, the wages are not enough to support their families so children live in poverty 2) single parenthood, is that children living in single-parent families, particularly those headed by women, are much more likely to be poor. On average, women earn less than men, reducing their ability to support a family. Two-parent families also have twice the income potential as single-parent families. ...read more.

Nowadays, they have to face some big problems that they musn?t face. Innocent faces, should dropped out from school because of costs and fees, do not eat healthy food ? or even rare to eat ? because of the lack of money to buy the healthy food, working along the streets under the blazing sun, while the other children sitting on the chairs at school at the same time. Dropped out from school, leaving the dreams. Some of their parents made those faults, made the poverty. The laziness, mischiefs and riots when they were still in youths built a big problem, failure that making bankrupts and end with poverty. Regret comes late, so make it never happen. Parents who are failed in the term economy, ought not be fail at the family harmony and guiding children. Make them become worthy persons in the future, that lead the country becomes better and also decrease the rate of poverty in Indonesia, not only in Jakarta ? even the world. For the government, they should distribute the agricultural assets, including land, and more access for the poor to better education and health facilities must be given as the first priority in poverty alleviation policies. No doubt, the poor are better off when the government gives more focus and run the functional organizations responsibility. ...read more.