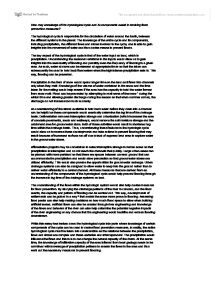 How may knowledge of the hydrological cycle and its components assist in devising flood prevention measures?

How may knowledge of the hydrological cycle and its components assist in devising flood prevention measures? The hydrological cycle is responsible for the circulation of water around the Earth, between the different systems in the planet. The knowledge of the entire cycle and its components, including precipitation, the different flows and stores involved in the cycle, one is able to gain insights into the movement of water and thus devise means to prevent floods. The key aspect of the hydrological cycle is that of the water input on land, which is precipitation. Understanding the seasonal variations in the inputs would allow us to gain insights into the seasonality of flooding and possibly even the frequency of flooding in a given area. As such, water at dams can be released at appropriate times so that the lakes can subsequently be used to hold back floodwaters when the high intense precipitation sets in. ...read more.

Both of these activities would result in shortened lag time within the drainage basin. Thus, understanding these features in the hydrologic cycle would allow us to reverse these developments and take actions to prevent flooding that may result because of increased surface run-off due to lack of exposed land area to capture water in the groundwater stores. Afforestation projects may be undertaken to raise interception storage in barren areas so that precipitation is intercepted and do not reach the channels that quickly. Large urban areas can be planned with more parkland so that there are spaces between covered ground that can accommodate the precipitation and would allow percolation so that groundwater stores are utilized efficiently. This would also provide the opportunities for groundwater recharge. Urban drainage systems can also be designed to allow water to seep into the ground rather than to deliver water efficiently to a central channel. ...read more.

While this essay has broken down the hydrological cycle into parts where knowledge of certain components of the cycle can be used to devise flood prevention measures, in reality, the entire hydrological cycle must be taken into consideration as the relations between the precipitation, flows and stores are complex and these variables and interdependent. The precipitation would influence the flows and this in turn can change the natural capacity of the rivers. At the same time, the knowledge of infiltration capacity of the area inferred from local geology needs to be combined with knowledge of precipitation patterns to assess the flows in the area and thus work out the necessary measures to prevent flooding. 1 Effect of this method unknown because I made it up 1 Effect of this method unknown because I made it up 2 Not directly addressing the question of flood prevention (this is a mitigation measure) ...read more.