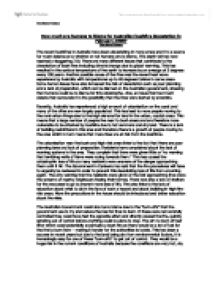 How much are humans to blame for Australian bushfire devastation in February 2009?

How much are humans to blame for Australian bushfire devastation in February 2009? Charlotte Hobson The recent bushfires in Australia have been devastating in many areas and it is a source for much debate as to whether or not humans are to blame. The death toll has now reached a staggering 210. There are many different issues that contribute to the devastation of bush fires including climate change due to global warming. This has resulted in the surface temperature of the earth to increase by an average of 5 degrees every 100 years. Another possible cause of the fires was the recent heat wave experience by Australia with temperatures up to 40 degrees Celsius in some areas. Some human issues have also increased the risk of devastation such as poor planning and a lack of preparation, which can be blamed on the Australian government, showing that humans could be to blame for this catastrophe. Also, an issue that had much debate that surrounds it is the possibility that the fires were started by arsonists. Recently, Australia has experienced a high amount of urbanisation on the coast and many of the cities are now largely populated. This has lead to more people moving to the rural-urban fringe due to the high demand for land in the urban, coastal areas. ...read more.

The most likely and widely accepted cause of the recent bushfires is arson attacks from individuals throughout Australia and in Victoria in particular. The police believe that arsons began at least two of the fires, and restarted two others after they had been successfully put out by the authorities. Many of the burnt-out towns have been declared as crime scenes and police investigators from all over the country are working to prove that the fires were in fact started by arsonists. On 12th February, a 39 year old man was arrested and charged with arson causing death for lighting a fire that caused the death of at least 21 people in eastern Victoria. However, with regards to the other fires, it will be very hard to gain concrete evidence to charge specific people, especially with restarting the fires because the embers could have been burning under the vegetation and could have restarted of their own accord. However, there are also environmental risks that could have caused such devastation including the Indian Sea Dipole (IOD) - the irregular warming and cooling of the south of the Indian Ocean. It changes the amount of moisture and evaporation from the sea and therefore the amount of precipitation that occurs. ...read more.

These gases trap rays from the sun meaning that the Earth heats up and bushfires are becoming are more regular occurrence. The recent bushfires in Australia could be blamed on a number of different reasons, but together they all link together and have enhanced the devastation. Humans are to blame due to arsonists, uncontrollable "burn-offs" and the lack of preparation to deal with such a crisis. This in turn led to people not being able to escape because there were no early warning systems. In some states, people were told to stay and protect their homes which had serious consequences for many families who did not flee when they had the chance. However, the environmental issues also had serious impacts on the devastation because if the area was cold and wet, the fires would have been more easily stopped. Arsonists can easily be blamed as the immediate cause of the fires, but maybe not so much for the devastation caused. The fires were spread quickly by the flammable Eucalypts and the land was dry and the climate windy due to recent climate change, the heat wave, the recent El Ni�o event and the Indian Ocean Dipole. It is easily to argue whether human issues or environmental issues are to blame for the devastation, and it is very hard to pinpoint an exact answer. ?? ?? ?? ?? Charlotte Hobson ...read more.