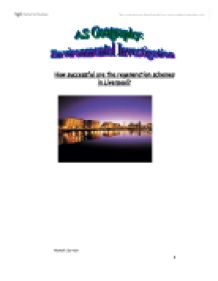 How successful are the regeneration schemes in Liverpool?

How successful are the regeneration schemes in Liverpool? Index Title Page Purpose of Investigation 3 Data selection, Collection and Recording 4 Data Representation, Analysis and Explanation 7 Conclusion and Evaluation 11 Bibliography 13 How successful are the regeneration schemes in Liverpool? Purpose Of Investigation The purpose of this investigation is to find out how successful the regeneration schemes in Liverpool were. The things that I am looking for is comparing the 'then and now' of the projects so I can see how they have improved the area. The improvements consist of the population and the environmental quality of the neighbourhood. I think what I might expect is that the quality has risen to a high started as most of the buildings are going to be modernised and have careful planning. In the Industrial Revolutions times everything was done as a rush because the more goods they produced, the better the profits, and people moving to the area to find work, so worker houses were need to be there for when they came. I think that the population would have gone down since the schemes, even though the region has been improved. This would have been because there were so many people cramped up in smaller houses in he late 19th and early 20th Centuries, that now bigger houses have been built with gardens and new amenities, there is less population density so therefore less population. Throughout my study I will try to answer the three following questions: * What Regeneration schemes are there? * Why does Liverpool need regeneration schemes? * What have they done to regenerate the Albert Docks-How has it succeeded? ...read more.

There is also a full caretaker service and secure underground parking. In 1993, a new development was opened for Littlewoods Chain Stores bring more employment into the docks. Also relocated Customs and Excise VAT Headquarters moved from Southend with up to 1,100 jobs. There are now 90 businesses employing just under 1,000people. As you can see there are wide ranges of facilities attracting all types of people to the area-'yuppies', families, the elderly and young people as you can see in the pictures of crowds above. I think the trend in the Albert Docks is, you need to spend money to make money. Even though the Albert Docks took 6 years to revive and �60 million it has bought people back to the city centre of Liverpool, but not just one type of person, many types. When people are bought back by one thing, it encourages other investment and more regeneration schemes to happen. These are two population graphs of Liverpool and I am using them to show why Liverpool needs regeneration schemes and how regeneration schemes have effected the population of the suburbs since they have been done. The first graph shows the population growth and decline in Liverpool over 100 years. As you can see between 1890 and 1940 there is rapid growth because of the industrial revolution and the working of the docks. However, once the docks started to decline after 1940 there has been a population decrease and workers were moving out of the city to find new jobs. The docks closed because the port was on the wrong side of the country for trade and large ships could no longer fit into the docking areas. ...read more.

For example the secure fence around the Eldonian village, it makes people feel safe. Also the lay out of the housing so there aren't any dark alleyways but everyone keeps an eye on each other like a community. I think the next project that will go ahead will be in Speke. It is an out of town housing estate in much need of repair as there is crime and bad quality of life. It has already started with a new community school. As it's a place where teenagers are, it would be a good idea for a sport hall where they could get interested in something or a pool hall where they are not out on the streets causing trouble and damage. The limitations of my study was that I couldn't find about the population closer to this time as it would have been helpful to prove that the population had been rising over the last couple of years. Also detailed census data would have been useful for 100 years go and now. I could then compare population density, housing number and amenities people would have in their homes (QofL). I would have also liked to have talked to the people from the Eldonian Village to see how they had to fight for what they wanted and also how they decided what facilities to have. I could have found out more if I had gone to Liverpool City Council to find out records about the regeneration projects and also about what conditions were like in the industrial revolution time. Also what regeneration projects were next for the city. If I could change it to make it different I would have found more about the Albert Docks, I would have also maybe compared to another similar city that has not had regeneration projects to compare the two. ...read more.

Overall rating: 4 out of 5 stars.
- Some high quality description and analysis of the past and present situation based on a lot of useful research.
- The data is used throughout the project and there are some inter-linkages and integration.
- Photos could be made more useful by relating to them more within the text and adding detailed annotations.
- The evaluation is limited to what ELSE they want to do. There is some mention of basic limitations in the methodology table but much more discussion and detail is needed at the end of the report, especially for the data that was collected.