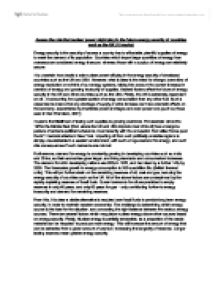 Assess the role that nuclear power might play in the future energy security of countries such as the UK (15 marks) Energy security is the security of access a country has to affordable, plentiful supplies of energy to meet the demand of its population. Countries which import large quantities of energy from overseas are considered energy insecure, whereas those with a surplus of energy are relatively secure. It is uncertain how drastic a role nuclear power will play in the energy security of developed countries such as the UK and USA. However, what is clear is the need for change; some kind of energy revolution or re-think of our energy systems, taking into account the current increase in demand of energy and growing insecurity of supplies. Several factors affect the future of energy security in the UK and other countries such as the USA. Firstly, the UK is extremely dependent on oil - it accounting for a greater portion of energy consumption than any other fuel. Such a dependence means that any shortage of supply or price increase can have dramatic effects on the economy, exacerbated by inevitable power shortages and even power cuts (such as those seen in San Francisco, 2001). It seems that likelihood of losing such supplies is growing evermore. ...read more.

Also, only a small quantity of uranium is required to produce comparable amounts of energy produced by large amounts of coal, oil or gas. One kilogram of uranium can produce 20 terajoules of energy; hugely contrasting the relatively meager quantity of only 47 megajoules for gasoline oil. Once again, this increases the longevity of reserves and energy security as a result. Unlike how the majority of oil in the UK is imported from politically unstable regions of the world, there are large reserves of uranium in politically stable, trading nations such as Canada, Australia and the USA. All of these have strong trade links with the UK, ensuring demands for uranium are met and further increasing the energy security that would result in future investment in nuclear power. However there are many arguments to counter the advantages of nuclear power. Firstly there is the issue of nuclear waste and how best to deal with it. Uranium 238 (the main resource used to produce nuclear energy) has a half-life of around 4.5 billion years. It is not an issue that will go away with time; there needs to be a method of sustainably disposing of the waste materials, in a way which will not cause any great environmental damage. The disposal of nuclear waste makes nuclear power vulnerable to mitigation and protest, reducing the energy security it would initially provide for countries such as the UK. ...read more.

For example, the New Hope Power Partnership plant in the USA reduces dependency on oil by over 1 million barrels a year. Perhaps due to the availability of such alternative sources of energy, there is not a requirement for such a shift in energy production patterns that would place nuclear at the top. It is entirely possible that greater investment in renewable energy sources will be the preferred method of dealing with current energy security issues. It is entirely possible that nuclear power will play an important role in the future energy security of countries such as the UK, simply due to the vast amount of energy it can produce and the stability of nations in which reserves are found. Although there are issues with it as a source of power, I feel once the innovation to dispose of the radioactive waste without causing significant environmental damage is discovered, then there will be very few disadvantages with it as an energy source. However, the question is whether such an innovation will be found in the next 65 years, before our reserves of oil and gas are completely depleted. Renewables such as wind, biomass, solar as well as others may also play an important role in future energy security, however it is uncertain whether they can produce the sheer quantity of energy required to meet growing energy demands. ?? ?? ?? ?? ...read more.