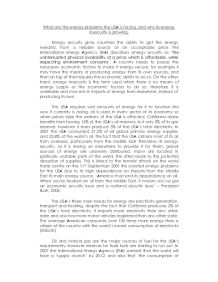 Energy security gives countries the ability to get the energy needed, from a reliable source at an acceptable price.  The International Energy Agency (IEA) describes energy security as ‘the uninterrupted physical availability at a price which is affordable, while respecting environment concerns’. A country needs to posses the necessary economic factors to make it energy secure, for example it may have the means of producing energy from its own sources, and then on top of that requires the economic ability to do so. On the other hand, energy insecurity is the term used when there is no means of energy supply or the economic factors to do so; therefore it is unreliable and may rely in imports of energy from elsewhere, instead of producing its own.

The USA requires vast amounts of energy for it to function the way it currently is doing, oil is used in every sector of its economy so when prices raise the entirety of the USA is affected. California alone benefits from having 16% of the USA’s oil reserves, but only 3% of its gas reserves, however it does produce 5% of the USA’s total electricity. In 2007 the USA consumed 21.3% of all global primary energy supplies and 23.8% of the world’s oil, the fact that the USA obtains most of its oil from overseas, particularly from the Middle East threatens its energy security, as it is relying on elsewhere to provide it for them, global sources of energy are unevenly distributed, many are located in politically unstable parts of the world, this often leads to the potential disruption of supplies. This is linked to the terrorist attack on the world trade centre on the 11th September 2001 this created energy problems for the USA due to its high dependence on imports from the Middle East its main energy source. ‘America must end its dependence on oil. When you’re hooked on oil from the Middle East, it means you’ve got an economic security issue and a national security issue’ – President Bush, 2006.

Oil and natural gas are the major sources of fuel for the USA’s requirements; however reserves for fossil fuels are starting to run out. In 2007 the International Energy Agency (IEA) warned that the world will face a ‘supply crunch’ by 2012, and also that ‘the consumption of natural gas will double by 2030’, placing more pressure on the economy as prices rise, on top of this by 2030, global oil consumption is expected to reach 113 barrels a day compared to around 80-85 barrels in 2008. Between the years 1960-2003 the USA’s reliance on imported oil and gas increased from 18%-58%. This has proved to be a great problem for the USA as prices of barrels of oil soar, from $20 to $60 over the previous ten years, at one point a single barrel was $140, with some predicted prices at an astonishing $200.

One aspect which clearly displays the trouble the USA is going through is the California blackouts; this led to California suffering an energy crisis between June 2000 and May 2001. Numerous factors led to the blackouts, one being the weather, during this period the weather had not supplied the necessary material to aid the energy production, such as a drought in 2000, which led to hydro-electricity plants suffering, also the summer of 2000 had high temperatures which meant more people required the use of air conditioning. Another factor was the introduction of anti-pollution energy laws which meant that new power stations were expensive to build and energy companies refused to invest and adapt their plans. There was also a limited supply of power lines which meant there were not enough means of transporting electricity. Additionally, Enron the large American energy company decided to keep the prices of energy very high, even when there was no lack of energy, there was infact a plentiful supply. This meant that other power companies such as Pacific Gas, Electricity, and Southern California Edison were forced to shut off their energy supplies as their supplies were gradually running out.

In conclusion, it appears the main issue the USA faces linked with their energy insecurity, is due to the fact that the majority of the energy used it brought in from abroad, and from the places which as politically unstable making it an unreliable source. On top of that, prices of energy sources, such as oil are rising as the fossil fuel itself runs out, or there is corruption within the owners and producers of the energy, resulting in an overall rise affecting all sectors.