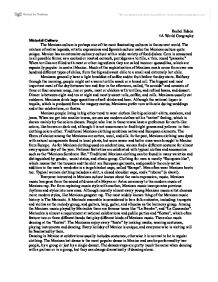 Rachel Edson 4A World Geography Material Culture The Mexican culture is perhaps one of the most fascinating cultures in the current world. The mixture of native legends, artistic expressions and Spanish culture make the Mexican culture quite unique. Mexico has an extensive culinary culture with a wide variety of food dishes. Corn is consumed in all possible forms: as a cooked or roasted corncob, porridge as a tortilla, a thin, round "pancake." When tortillas are filled with meat or other ingredients they are called tacos or quesadillas, which are especially popular in central Mexico. Much of the sophistication of Mexican meals come from over one hundred different types of chiles, from the big and sweet chile to a small and extremely hot chile. Mexicans generally have a light breakfast of coffee and/or fruit before the day starts. Halfway through the morning, people might eat a warm tortilla snack or a bread roll. The biggest and most important meal of the day between two and four in the afternoon, called, "la comida" and consists of three or four courses: soup, rice or pasta, meat or chicken with tortillas, and refried beans, and dessert. Dinner is between eight and ten at night and mostly sweet rolls, coffee, and milk. Mexicans usually eat outdoors. Mexicans drink huge quantities of soft drinks and beer. Although the national liquor is tequila, which is produced from the maguey cactus, Mexicans prefer rum with cola during weddings and other celebrations, or fiestas. Mexican people living in big cities trend to wear clothes like big colored t-shirts, sneakers, and jeans. When we get into smaller towns, we can see modern clothes with a "native" feeling, which is shown mainly by the colors chosen. People who live in those towns have a preference for earth-like colors, like brown or dark red, although it is not uncommon to find bright greens and yellows in their clothing colors either. ...read more.

Both are elected by popular vote. The Federal District also has an Assembly of Representatives. The local administrative level is the municipality, which is governed by a popularly elected mayor and a municipal council for three-year terms. Suffrage is universal and mandatory (not enforced) for those over the age of eighteen. Mexico's population still contains many Indian groups. Depending on the definition used, the total number of Indians varied from 6.7 million to 10 million in 1995. The most significant groups are the Nahuas, Otom�s, Mayas, Zapotecas, Mixtecos, Tzeltales, and Tzotziles. For Mexican, the family is at the top of the priority list and are a big deal. The extended family is as important as the small family and helps provides a sense of stability. Mexicans consider it their duty to help family members. Family members can help find employment or finance a house or other large purchases. Most Mexican families are very traditional, with the father as the head decision maker. Mothers are greatly honored but their role may be seen as secondary to that of their husband. Mexicans respect authority and look to those above them for guidance and decision-making. Rank is important, and those above you in must always be treated with respect. This makes it important to know which person is in charge, and leads to an authoritarian approach to decision-making and solving problems. Mexicans are very aware of how an individual fits into each hierarchy depending on family, friends or business. It would be very disrespectful if someone broke the chain of hierarchy. But maybe the most important characteristic of the Mexican people is their festive spirit. It's hard to believe that people who have suffered so much throughout history have such a great celebration mood. Every single holiday, National, religious or local, has its celebration. The most famous of those celebrations are the Fiesta de Cinco de Mayo, the Novena or nine days before Christmas and the celebration of Independence Day. ...read more.

Most Mexican regional capitals and resorts have direct air services to Mexico City or the United States. In 2005, the Government of Mexico agreed to sell Mexicana and Aeromexico, of the two main national airlines, to a private investor. Airports are semi-privatized with the government still the majority holder, but with each regional airport group maintaining operational techniques. The telecommunications system is dominated by Telmex, the former state-owned company. Several companies compete in the sector with limited success. The teledensity rate in Mexico (19%) is below average in Latin America. Wireless penetration is much higher, with over 65 million wireless subscribers in early 2008, although 31 million of the customers use prepaid cards, and many use their phones to receive calls only. Mexico's satellite service sector was opened to competition, including limited foreign direct investment, in 2001. Mexico has 76 seaports and 10 river ports. The four major seaports concentrating around 60% of the merchandise traffic are Altamira and Veracruz in the Gulf of Mexico, and Manzanillo and L�zaro C�rdenas in the Pacific Ocean. The US Census Bureau estimated in 1990, that 13,496,000 people of Mexico ancestry were living in the US, up from 8,740,000 in 1980. The US has since banned unnecessary border crossings, and the 1986 Immigration Act imposes stiff penalties on employers who hire illegal aliens. Nevertheless, hundreds of thousands of illegal crossings still take place annually. As of 1999, Mexico was host to some 2,500 urban refugees, who had remained from the Central American conflict of the 1980s. Also, the largest community of US citizens living outside the US, estimated at 200,000, is found in Mexico. Mexico has also been receiving higher numbers of asylum-seekers from outside the U.S. The country of Mexico is a great place to study the effects of globalization because of poverty, the U.S. border and many reasons. Many people in Mexico are going better do to globalization because many countries have helped with their poverty lines and they are doing better in the parts of the country where globalization has become more a part of with globalization. ...read more.