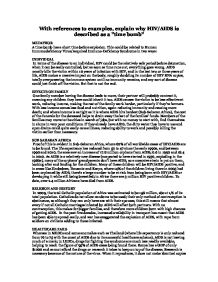 With references to examples, explain why HIV/AIDS is described as a &quot;time b**b&quot;

With references to examples, explain why HIV/AIDS is described as a "time b**b" METAPHOR A time b**b has a short time before explosion. This could be related to Human Immunodeficiency Virus/Acquired Immuno-Deficiency Syndrome in two ways: INDIVIDUAL In terms of the disease to an individual, HIV could be the relatively safe period before detonation, when it can be easily controlled, but as soon as time runs out, everything goes wrong. AIDS usually kills the victim within 10 years of infection with HIV, and in the last two or three years of life, AIDS makes a massive impact on the body, roughly doubling its number of HIV RNA copies, totally overpowering the immune system until no immunity remains, and any sort of disease could just finish off the victim. But that is not the end. EFFECTS ON FAMILY One family member having the disease leads to more, their partner will probably contract it, meaning any children they have could inherit it too. AIDS causes the victim to be less effective at work, reducing income, making the rest of the family work harder, particularly if they're farmers. With less income comes less food and nutrition, again reducing immunity and causing more death; and where income is as tight as it is where AIDS hits hardest (Sub-Saharan Africa), the cost of the funerals for the deceased helps to drain away the last of the families' funds. ...read more.

onset of AIDS due to its successful healthcare scheme), AIDS is not leaving much of a mark; in LEDCs, drugs for fighting the syndrome are much less readily available, helping to reach the figure of 95% of AIDS cases being found there. Kenya has a GDP of only $1200 and cannot afford the drugs or research it takes to keep on top of the disease. Research is necessary because of the nature of the virus. When it reproduces, it does not make identical copies of itself, so medicines must constantly be altered to stay effective. In such areas, there is little hope for improvement. Research is expensive, and countries that carry it out will not simply give away the formulae to countries that can't pay for it. This means that the disease cannot be kept under control, and will just keep engulfing the nations in question. NOT KNOWING ABOUT IT Another factor adding to the expansion of the disease is that in many countries it is a taboo subject; victims are ashamed and will seek no help for it, and may not even tell anyone, and with poor healthcare and no obvious symptoms, it may never be diagnosed; only 1% of the s******y active population of Africa has actually been tested for HIV. There is also a religious theory that AIDS is a punishment from God, so those who know that they have it keep it a secret. ...read more.

find that their best chances of employment are to be found in the s*x industry. Statistics show that s****l activity of any kind is more likely to infect the woman, for example, s****l intercourse infects twice as many women as men in the USA. So LEDCs don't develop and AIDS keeps spreading. TACKLING WITH HELP FROM MEDCS There are positive measures being put in place. The UN and World Bank are offering money in the form of fundraising or interest free loans to work against AIDS. Some companies are producing cheaper drugs to combat it, some aid programmes are helping to provide jobs outside the s*x industry, and education is provided; but the prospects do look bleak. Many solutions are not put into practice; it seems obvious that if the worst affected countries (the LEDCs that can't develop, partially due to their massive debts) could have their loans repaid, reduced or removed, more money would be created to spend on healthcare and education; two things that would help improve the country and create money. CONCLUSION/SUMMARY In a continent where healthcare and money is very poor, the disease cannot be easily tracked or tackled. Where the subject is taboo, AIDS can spread quickly. Where education is failing, lack of knowledge increases those infected. And as orphans are created, worse quality of life (early contraction of the disease, lack of education and job prospects), AIDS looks set to spiral out of control, fitting adequately to the metaphor of a time b**b. 1436 Freya Gilmore ?? ?? ?? ?? ...read more.