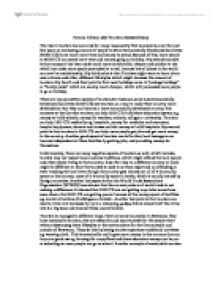 In conclusion, I think tourism can be good only if it is sustainable, for example- what they are doing in Botswana

Fatuma Ukwaju 9RJ Tourism Assessed Essay The rise in tourism has occurred for many reasons.My first example is; over the past few years an increasing amount of people in More Economically Developed Countries (MED C'S) have much more time and money to spend. Because of this, more people in MED C'S can spend more time and money going on holiday. My second example is that transport has been made much more comfortable, cheaper and quicker to use which has made more people persuaded to travel, because lots of places in the world can now be reached easily. My third point is that Tourists might want to learn about new cultures and other, different life styles which might increase the amount of tourism. ...read more.

Another good aspect of tourism would be that; local teenagers can become independent of there families by getting jobs, and providing money for themselves. Unfortunately, there are many negative aspects of tourism as well, which include; tourists may not respect local customs traditions, which might offend the local people and other people living in that country. Also the rules in a different country or place might be different to what the tourists is used to so they might end up offending or even breaking the law! Even though the country gets money not all of it is actually spent on the country, most of it is actually spent in hotels, which is usually owned by foreign countries. Another bad aspect is that the World Trade Researchers Organisation (WTRO) ...read more.

Another example of sustainable tourism is in Tanzania (east Africa) they have sustainable tourism as well e.g they have a national safari park (Serengeti national park). this is sustainable because they do not harm the animals as they are kept in wide vast open space to roam about freely, the viewer and tourists always see them from a distance, never to close to startle them. this means they are not harming the animals in any way, so it is sustainable. In conclusion, I think tourism can be good only if it is sustainable, for example- what they are doing in Botswana but not if it is unsustainable for example-what they are doing in a place in Spain which is ruining their beach in the end int wont be worth it.but over all i think tourism is good only if sustainable. ...read more.