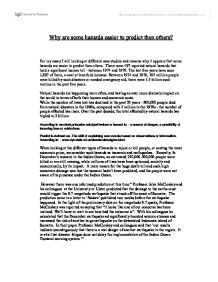 In December's tsunami in the Indian Ocean, an estimated 250,000-300,000 people were killed or are still missing, while millions of lives have been upturned, socially and economically, by its impact. A main reason for the huge death

Why are some hazards easier to predict then others? For my essay I will looking at different case studies and reasons why it appears that some hazards are easier to predict then others. There were 497 reported natural hazards that took a significant human toll - between 1974 and 1978. The last five years have seen 1,897 of them, a nearly three fold increase. Between 1974 and 1978, 195 million people were killed by such disasters or needed emergency aid; there were 1.5 billion such victims in the past five years. Natural hazards are happening more often, and having an ever more dramatic impact on the world in terms of both their human and economic costs. While the number of lives lost has declined in the past 20 years - 800,000 people died from natural disasters in the 1990s, compared with 2 million in the 1970s - the number of people affected has risen. Over the past decade, the total affected by natural hazards has tripled to 2 billion. According to wordnet.princeton.edu/perl/webwn a hazard is: - a source of danger; a possibility of incurring loss or misfortune. Predict is defined as:-The skill of explaining new events based on observations or information. ...read more.

Ships and boats have been untouched by tsunamis as they glide silently underneath them. These hazards only become visible as the water becomes shallower as the land approaches. This is what causes the tidal wave, to rise and crash onto the shore. This is what makes prediction so hard. In September 1998, hurricane Georges crossed the Dominican Republic, Haiti, the Florida keys and then hit the southern state of Mississippi east of New Orleans. The death toll in the Dominican was estimated to be over 500, in Haiti it was over 100 yet in the US only 4 people were killed. The only difference in the events was that the US had predicted the route and velocity of the hurricane. Hurricanes are easy to predict, due to hurricane seasons , this is when hurricanes can come inland due to pressure. Hurricanes can easily be picked up on satellites, triggering off early warning systems. With Hurricanes easy to spot and see death tolls can greatly be reduced as people can have prior warning. Volcanoes such as Mount Saint Helens in Washington USA, are easily predicted, due to there being visible volcanic activity. ...read more.

Prediction of hazards is often closely related to location and potential economic damage. For example there as been little research into what causes avalanches and few devices able of calculating when avalanches are going to happen. This is for the simple reason that very few people are affected by such hazards, so the need for sufficient research and prediction is not high. Hazards in LEDC countries such as the flooding in Bangladesh although can be predicted quite well due to seasonal rainfall and a build up of pressure can not be researched fully due to Bangladeshis poor economic status. As no money is available to them for research and prediction, none can be obtained, meaning that the problem will constantly persist. In conclusion I would say that, yes some hazards are easier to predict then others, due to substantial research being done in some areas, such as hurricanes. Other hazards such as volcanoes can be seen prior to the event, so can also easily be predicted that an eruption will be eminent. As yet prediction is not good enough to predict some hazards such as earthquakes, making them hard to predict, perhaps only giving moments warning, if any at all. ...read more.

The response given in the introductory paragraphs is excellent. However, it could have been improved by a clearer structure; for example, the definition should have come first. Also the second and first paragraph responded in exactly the same way but ...

The response given in the introductory paragraphs is excellent. However, it could have been improved by a clearer structure; for example, the definition should have come first. Also the second and first paragraph responded in exactly the same way but just using different statistics, one should have responded to the 'why' part of the question or failing that outlining the different hazardous events would have been a good start. The essay after this was still structured poorly, but started to respond more directly to the focus of the question, especially in the last five paragraphs. The question was responded to well in the St Helen's case study as it shows how this event has been predicted. The response was just above average, but given the large volume of information I would be concerned if it was not above average and it is surprising that it is not better, and this is because the response was not focused on answering the question enough.

Some of the analysis is slightly irrelevant, such as the prediction of Professor McClosky. However, if the paragraph was linked back to the question then it would have been relevant. The candidate must remember to analysis information using PEEL - Point, Evidence, Explain, and Link. Consistent use of this technique in the essay would have brought it up to an excellent standard. I was impressed that the tsunami prediction contained intricate detail which is necessary at A level, as well as that of hurricanes. However, more could have been mentioned about flooding, and this could have been linked with the flooding that will be inevitably brought by hurricanes, which is easy to predict. The conclusion summarises prior information well, although 'I would say that, yes' is a phrase which is not needed. The fact that there is an earthquake/tsunami prediction centre in the Pacific Basin and not in the Indian Ocean should have been mentioned when writing about the Indian Ocean 2004 tsunami. Overall the analysis was good, but this was due to the appropriate number of statistics used.

Geographic terminology was good, more detailed descriptions using geographic terms about the formation of these hazards would have been better. The essay did do a lot of 'waffling' in most instances. Grammar, spelling and punctuation were excellent.