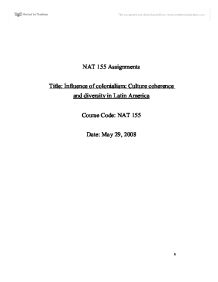 Influence of colonialism: Culture coherence and diversity in Latin America

According to Brea, approximately 4 million indigenous people were killed by 1650 and colonists brought about 9 million Africans to Latin America as slaves at the same time. Brea continue feature out that in the following two centuries, the European settlers were not numerous in the amount but they control the economic and political power in Latin America and he named this period "Slow Growth" because "the high death rates throughout Latin America produced a low rate of population growth" (5). The really rapid population growth comes after the independent movement of Latin America countries since 1950, accompanied by the improvement of the economic situation in this area. Form the data of Brea' book, we can see that the annual increasing rate of population is more than 3 percent or higher for decades and there are 520 million people in 2000. Language According to historical definition of Latin America, language is one of the most important characteristics of culture. Most people living there speak similar languages, including Spanish, French and Portuguese, which are all derived from Latin language. According to Brea's research, before the arrival of European colonizers, there are only native languages in Latin America, including Quechua, Mixtec, Kekchi and many other languages. ...read more.

This religion was first introduced by the European settlers, such as sailors and farmers. There are many Catholic churches in Latin American countries, no to mention Christ the Redeemer, a famous statue in Brazil, which was located on a mountain named Corcovado and famous for people around the world. "Brazil, which was discovered and colonized by the Portuguese, is sometimes called Portuguese America" (Paul Kramer 51). Although Catholicism possesses the dominate position in the theology, there are still some other religions exist in this Area. According to Benjamin Krutzinna's book, Roman Catholicism, the professed faith of over four-fifths of population, is by far the dominant religion, but in the some rural areas, the faith is highly syncretistic, that Catholicism be blended with indigenous beliefs (19). "The survival of ancient cultural traditions was frequently achieved in defiance of the colonial authorities' attempts to impose European ways" (Duncan Green 90). "The polytheism of native religions enabled the indigenous people to integrate Catholic tradition into their own religious system" (Krutzinna 19). Krutzinna also notes in his book, Let's Go Central America, that there are other religious forces begin to undermine the dynamic relationship that has traditionally existed between Roma Catholicism and native religious beliefs. The trend of religions in Latin America may to be more diversified in the following decades. ...read more.