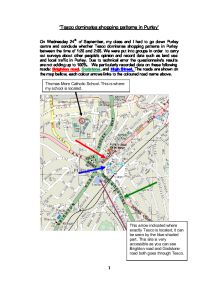 'Tesco dominates shopping patterns in Purley' On Wednesday 24th of September, my class and I had to go down Purley centre and conclude whether Tesco dominates shopping patterns in Purley between the time of 1:20 and 2:05. We were put into groups in order to carry out surveys about other people's opinion and record data such as land use and local traffic in Purley. Due to technical error the questionnaire's results are not adding up to 100%. We particularly recorded data on these following roads: Brighton road, Godstone, and High Street. The roads are shown on the map bellow, each colour arrows links to the coloured road name above. The following results represent the results of the traffic survey that one of my groups had to collect. These results were recorded between the times of 1:20pm and 2:05pm and took place in a range of different roads; such as: Brighton road to Croydon, Brighton road from Croydon, High street, Godstone Road from Caterham and Godstone road to Caterham. The purpose of this survey was to total the number of vehicles that used the above roads. As the different graph shows, there are many different type of vehicle recorded in this survey, cars, buses, Lorries vans and bikes. I decided to produce different graphs for each case, as it will be easier to compare results one to another and could be analysed more precisely. The above bar chart is the first graph that I am going to analyse. It represents the number of vehicles that went through Brighton road to Croydon. As the graph shows, the common type of vehicle that went through this road is the car as 81 cars were travelling between the times of 1:20pm to 2:05pm. The bus service is quite rare as only 3 buses occurred in 45 minutes time so it could mean that people tend to drive their own cars in order to get to the A road more rapidly. ...read more.

Moben, which is kitchen furniture, may have been closed down because of Tesco as it also provides house furniture. Many other furniture shops and restaurants might decide to close down since the number of clients decreases. 'Swayam ruchi' which is an Indian cuisine restaurant was closed at the time the data was recorded which was during lunchtime. These restaurants may soon decide to close down as not enough clients' visits their store. This pie chart represents the amount of people who finds whether Tesco is affecting all the local shops out in Purley. As the graph shows, about 93% agreed that Tesco affects the local shops and this might be evidence that some are shops closing down and more people from the community is starting to realise it. Accessibility is one of the major points that several groups of people use mainly in a store such as Tesco. Tesco is one of the shops that give many facilities to their clients. Tesco provides its client with many facilities for all sorts of people from toddlers to elderly people. It supplies a number of parking places for these groups of people are placed very close to the shop so it will be easier for them to get access to the shop. A good shopping centre or store should not only provide facilities outside the store but also inside it. There should be different type of access such as lifts needed for disabled people and escalators for people carrying shopping and toddlers. Toilets, disables' toilet and baby's changing rooms can be very useful for all groups of people. Accessibility is very important in shops as more accessibility could possibly increase the amount of customers. Large companies such as Tesco mainly uses loyalty card also called 'club card'. These cards are supplied for the store's customers where they will be given a discount depending on the amount and the type of product they purchase. ...read more.

70% of the people in the community agree that Tesco has increased the amount of traffic in Purley. Tesco also put in place a number of competitions with a number of shops, which lead to many of them closing down. Tesco tries to sell a number of goods, such as convenient and durable goods in one store and this could affect all the other shops in the area not only getting close down but it will also decrease the amount of people employed in it. Tesco competing with the other local stores takes many risks taken for Purley, shop closing down due to no customers in their shop, a decrease in employment so less people will live in the area due to no business. Local business that are already affected by red route as they loose many clients everyday because of it will now have to experience the loss of clients because of Tesco as it provide its customers of a number of choices that no other shop will be able to purchase. If local shops keeps on the area takes closing down a major risk. Another reason for why some people may want Tesco to close down will be due to the amount of business closing down because of Tesco. If Tesco closes down, more business will survive, as they won't have to be in competition with Tesco. 89% of Purley's population thinks that Purley is not attractive and would like it to be improved by mainly reducing the amount of traffic, getting rid of Tesco, getting rid of red route system, having more parking places or by even benefiting of better variety of shops. I agree with the public, less traffic will make a massive change for Purley; the only way this can work is by getting rid of red route and Tesco so less people will come to the area for supermarkets like Tesco so less traffic will take place. I hope that they will take into consideration the views of Purley's residents and public and make Purley a better place. ?? ?? ?? ?? 1 ...read more.