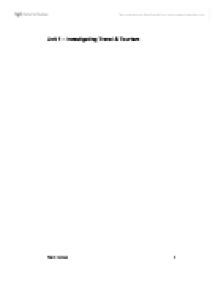 abroad than overseas visitors to the UK and therefore there is a deficit in the balance of payments * The British Government is trying to resolve this by encouraging more overseas visitors to the UK. E2 - Scale of the UK Industry and its Economic Significance This is a multi billion pound industry and has a major influence on the economy in the terms of consumer spending and employment. Examples of organizations that produce statistics are: * Government statistics * British tourist authority * National and regional tourist boards * Industry bodies such as ABTA, Mintel and Keynote To assess the scale of the UK industry and its economic significance we have to analyse the UK travel and tourism revenue and its contribution to the national economy and also look into employment statistics and research into inbound, outbound and domestic tourism in the UK Visit England states that in the year of 1998 the UK industry was worth �61,201 million making the UK the fourth largest earner of foreign exchange. This is what the money was spent on Trips (Millions) Spending (�m) UK Residents 122.3 14,030 Overseas Visitors 25.7 12,671 Total 148.0 26,701 This information was taken from the Collins text book on Travel and Tourism An example of a visitor attraction for which I have found statistics on is Flamingo Land. This visitor attraction employs about 375 staff a year and work either full time or part time from March to November. Flamingo Land has been able to increase its employment as well because of the opening of a 26 bed roomed staff accommodation block and this has brought in staff from as far away as Wales and Scotland. Most of the staff who are employed at Flamingo Land though are from closer in and in the local areas of Scarborough, Malton, York, Whitby and Pickering E3 A Full Explanation of the Present Structure of the Industry In order to give a clear explanation of the industry I am going to describe the role of the 6 components within it using a case study for each to explain the components role. ...read more.

No.: 01484 646264 Date of Birth: 16th May 1988 Nationality: English Status: Single Education Huddersfield New College 2004-2006 Salendine Nook High School 1999-2004 Qualifications AVCE SA Travel and Tourism 2006 BTEC National Award (Applied) E-business 2006 AS ICT 2006 AS Modern History 2005 History A 2004 ICT A 2004 English Literature B 2004 Spanish B 2004 Design Technology B 2004 Maths C 2004 French C 2004 English Language C 2004 Jobs Job Title: Partsource (Work Experience) Employer: Hannah Shaw Dates: February 2004 - March 2004 Main Duties: Packing, Invoicing, Accounts, Computer Work Skills Gained: Answering the phone and dealing with customers, doing computer work such as invoices and sales orders Job Title: Outlane Golf Course Employer: David Chapman Dates: March 2001 - September 2001 Main Duties: Selling Items, Cleaning, Talking to Customers, Answering the Phone Skills Gained: Dealing with customers, answering the phone, Invoicing, Accounting, Computer Work and cleaning up Hobbies/Interests Football: Manchester United supporter. Played for West End Juniors when 9/10 Tennis: Play two times a week at Huddersfield Lawn Tennis Association. Been playing for over a year Formula 1: McLaren Mercedes follower. Been to Spanish grand prix Skiing: Been going every year since I was 10. Taken part it one junior ski race for which I finished third in and got a bronze medal. Personal Statement I feel that I am a positive person who has a good outlook on life. I also feel that I am a good team player because I have done a lot of teamwork in various tasks. I also have good communication skills from experience from the jobs that I have done. I can work well with other people or independently as I get on with other people well. At high school I was also a prefect which entitled me to have certain responsibilities such as looking after a group of potential students for a day and helping out in form groups for the lower years as well as talking to parents about courses on occasions such as open day. ...read more.

A lot of topics and information covered through use of terminology and case studies and specific examples. Good use of stats- though more references and sources throughout would improve it overall. There are some opportunities for annotated images to be included to add another way in which to present info in an interesting way. Very clearly structured report with clear titles, sections and sub-sections. Good explanations which relate directly to the topic being written about. The conclusion has a good topic to it (fragility) but is a little weak in terms of its structure and wording.