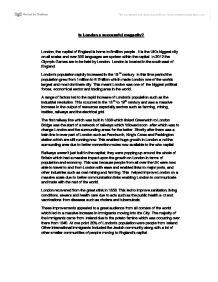 London, the capital of England is home to 8million people. It is the UK’s biggest city on all scales and over 300 languages are spoken within the capital. In 2012 the Olympic Games are to be held by London. London is located in the south east of England.

London’s population rapidly increased in the 19th century. In this time period the population grew from 1million to 6.7million which made London one of the worlds largest and most dominate city. This meant London was one of the biggest political forces, economical sector and trading area in the world.

A range of factors led to the rapid increase of London’s population such as the industrial revolution. This occurred in the 18th to 19th century and saw a massive increase in the output of resources especially sectors such as farming, mining, textiles, railways and the electrical grid.

The first railway line which was built in 1836 which linked Greenwich to London Bridge was the start of a network of railways which followed soon after which was to change London and the surrounding areas for the better. Shortly after there was a train line to ever part of London such as Fenchurch, King’s Cross and Paddington station which are still running now. This enabled huge growth in London and the surrounding area due to better connection routes now available to the who capital.

Railways weren’t just built in the capital; they were popping up around the whole of Britain which had a massive impact upon the growth on London in terms of population and economy. This was because people from all over the UK were now able to travel to and from London with ease and enabled links to major ports, and other industries such as coal mining and farming. This helped improve London on a massive scale due to better communication links enabling London to communicate and trade with the rest of the world.

London recovered from the great stink in 1858. This led to improve sanitation, living conditions, sewers and health care due to acts such as the public health act and vaccinations from diseases such as cholera and tuberculosis.

These improvements appealed to a great audience from all corners of the world which led to a massive increase in immigrants moving into the City. The majority of the immigrants came from Ireland due to the potato famine which was occurring over there from 1840. At one point 20% of London’s population were people from Ireland. Other international immigrants included the Jewish community along with a lot of other smaller communities of people moving to England’s capital.

The improve of medicines especially during the 18th and 19th century along with improve health care, standards of living conditions and sanitation the death rate fell dramatically with the birth rate rising dramatically. This increased the population of the whole of the UK but especially the area surrounding London and London it self.  This was one of the main factors for the sudden population increase of London and consequently improved all aspects of London like increased rates of manufacturing and improved economy of the area.

The introduction of a range of new buildings and landmarks over the years has pulled many people to move to the rather glamorous and rich lifestyle of London. These landmarks include those such as Trafalgar square, Big Ben, House of Parliaments, Tower Bridge, Royal Albert hall and more recently the London Eye and millennium dome. These newer additions along with a lot more tourist attractions such as the science museum and Buckingham Palace have helped increase the population of the city. Other major influences in people moving to London especially in the recent years is for the large range in extravagant shops, good nightlife and well paid jobs have all contributed to increased population leading to overall growth of the city.

Nowadays due to the influx of immigrants from all over the world, London has become one of the most diverse cities in the world and over 300 languages are spoken in the capital.

A minor decrease in population occurred during the two world wars which occurred which both killed many people who lived in the local area.

Due to the size of London the functions carried out range massively and include major sectors such as the economic sector which includes banking and businesses, tourism, politics and residential.

Roughly 30million tourists visit London a year which creates billions of pounds for the capital.  Tourists come to visit the many tourists attractions such as the London eye and House’s of Parliaments. People come for the shops; world renowned plays form the west end, the night life and museums such as the science museum and Tate gallery.

All the major banks and businesses operate their headquarters from London creating thousands of jobs along with millions of pounds which is great for the area. The area of Canary Wharf is especially we known for its economic activity which attracts many young business men to London.

The country is run from London with the House of Parliaments being the home of all political activities for the country. Finally London is home to 8million permanent residents. Manufacturing still has a major role in London with 11% of London’s economy coming from manufacturing.

Due to the massive range in cultures active in London there is a massive racial tension occurring which leads to criminal activity due to racisms which includes fights and other incidents.

Crime in general has also increased over the recent years which include gun crime with many killings being reported on the news recently, rape and every day to day smaller criminal activity is occurring on a regular basis in the capital.

Due to the massive population and massive output of products it’s having a massive negative impact upon the environment and the overall sustainability of the area. With the Olympics coming to London the main aim of the city is to clean up its act and become more environmentally friendly and sustainable. For example London and its residents use 876,000,000,000 litres and 28% of this was not needed or otherwise known as wasted.

Finally London are suffering from overcrowding which is the reason why many newer cities such as Milton Keynes Dons are being built on the outskirt regions on the city in the attempt to reduce overcrowding issues in the city. The city are having to resort to building tall high rise flat buildings and introducing congestion charges to try and reduce the traffic around London.