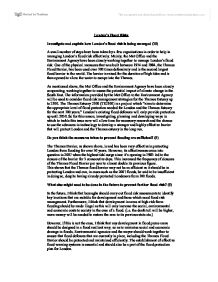 London's Flood Risks Investigate and explain how London's flood risk is being managed (10) A small number of steps have been taken by a few organisations in order to help in managing London's flood risk effectively. Mainly, the Met Office and the Environment Agency have been closely working together to manage London's flood risk. One of the physical measures that was built between 1974 and 1984, the Thames Flood Barrier, has been used over 100 times defensively and is the second largest flood barrier in the world. The barrier is raised for the duration of high tides and is then opened to allow the water to escape into the Thames. As mentioned above, the Met Office and the Environment Agency have been closely cooperating, working together to assess the potential impact of climate change in the South East. ...read more.

So for this reason, investigating, planning and developing ways in which to tackle this issue now will allow time for necessary research and the chance to use the advances in technology to develop a stronger and highly effective barrier that will protect London and the Thames estuary in the long run. Do you think the measures taken to prevent flooding are sufficient? (5) The Thames Barrier, as shown above, is and has been very effective in protecting London from flooding for over 30 years. However, its effectiveness came into question in 2007 when the highest tidal surge since it's opening in 1983 led to the closure of the barrier for 3 consecutive days. This increased the frequency of closures of the Thames Flood Barrier per year to almost double its previous figure. ...read more.

Furthermore, I think that development in areas at high risk from flooding should be made illegal as this will only increase the social, environmental and economic costs to society in the case of a flood. (i.e. the death toll will be higher, more money will be needed to restore the area to its previous state etc.) However, if this is not the case, I think that any development in flood prone areas should be designed in a flood resilient way, so as to minimise social and economic damage in floods. Environmental agencies and the mayor should work together to ensure that flood defences that are currently in place, including the Thames Flood Barrier should be protected and maintained efficiently. The establishment of effective flood warning systems is essential and should also be a part of the flood protection plan for London. ?? ?? ?? ?? ...read more.