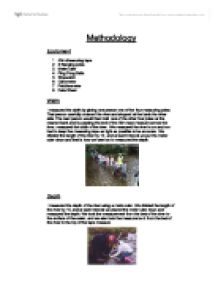 Measurments of a river 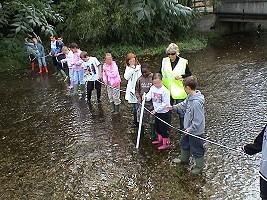 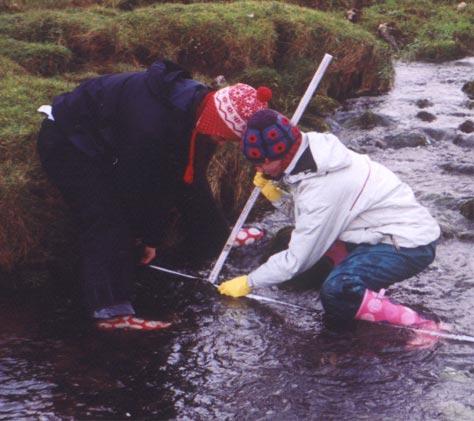 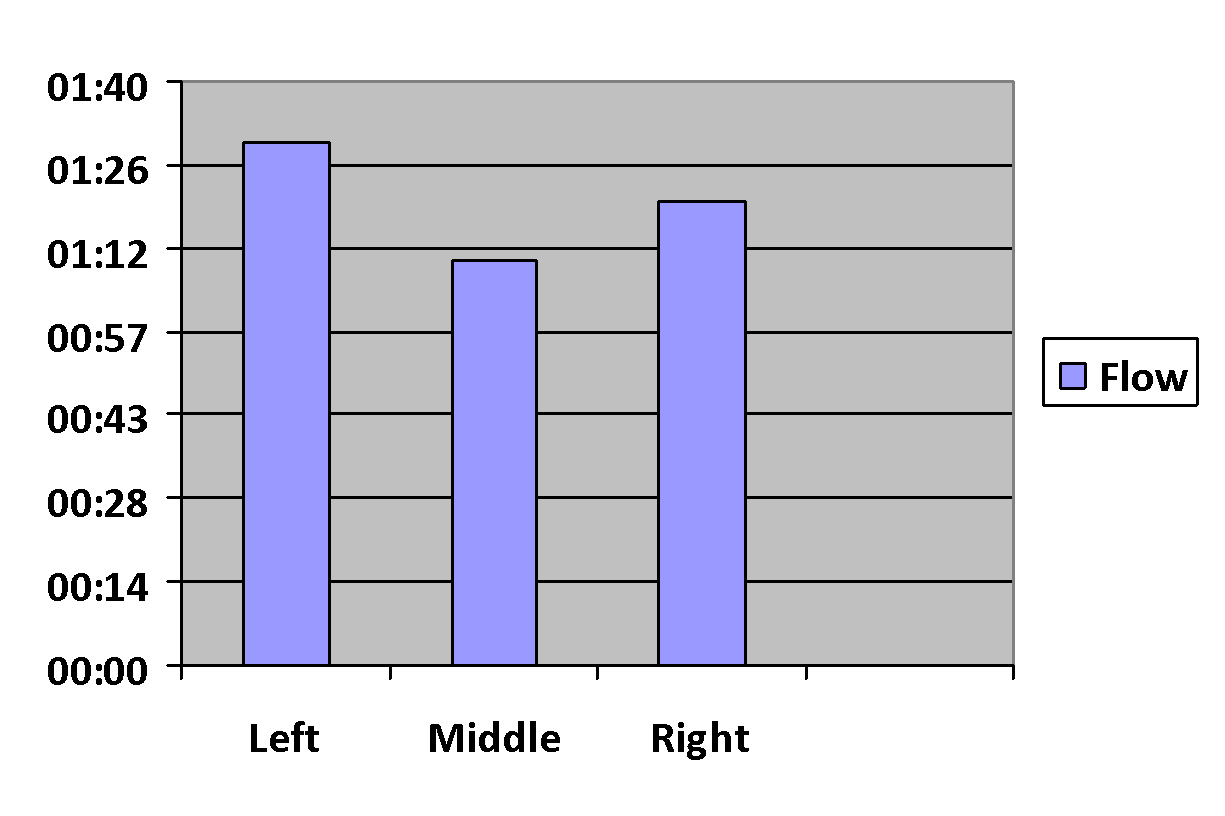 The gradient of a river is a measure of how steeply it loses height. A river with a high gradient loses height quickly and is typically fast flowing and youthful. A river with a very gentle gradient loses very little height and is typically a slow flowing mature river. In fact, a lowland stream may have a gradient which is so gentle that it is impossible to measure without specialised equipment.

In mountain areas the Gradient of the river bed is an important factor to measure. In lowland, the gradient is less significant as it is very gentle (between 1-3 degrees) along most of the rivers length. Only close to the source does it rise to between 3-10 degrees. In order to measure gradient, you need two ranging poles and a clinometer. The two ranging poles are held vertically, about 10 metres apart but further if possible). The person with the clinometer holds it level with the bottom of the red stripe and looks through the sight to the same position on the other pole. On a gun clinometer, the angle is recorded when the lever is pressed and then released, then the measurement is read.

A possible problem is that if the river bed is uneven and the distance between the ranging poles is small, it is not unusual to find that the river is going uphill! The accuracy of the clinometers is not good and differences may show up even where they don't exist.

A graph to show how the gradient of a river changes along its length is called a long profile. For lengthy sections of rivers this can be constructed using the contours on a good map; for shorter sections, especially where the gradient is noticeable, it is possible to measure the gradient directly with very simple equipment.

Firstly you need to break up the river into short lengths which you can easily measure. Then you need to stand at one end of the stretch with a pole whilst getting a helper to stand at the other end with the other pole. Make sure that both poles are vertical and the right way up. Place the clinometer against the height mark on your pole and look through the sight, adjusting the angle of the clinometer until you are looking directly at the height mark on the other pole. Taking care not to move the clinometer, look to see what angle is shown by realising the handle. It is a good idea to record the value at this point, and not to rely on memory. Your helper now moves the same distance again along the river and you take another reading. Keep repeating this until you have surveyed the whole of your study area.

Short sections of a couple of meters will give a very accurate profile, but you will need to take many readings to cover a long stretch of river. Long sections of 10meters or more can generate difficulties around meanders.

Anything from 5m to 15m is a good size stretch of river to survey per measurement. You can choose different distances every time you take a measurement, but this can make record keeping very difficult and confusing. Unless you have to alter your measuring length, you should keep it the same all the time. 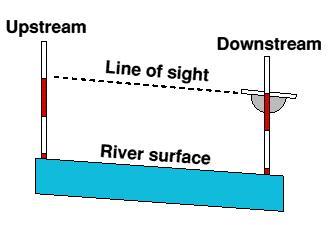 This is a diagram of how to measure the gradient.

Laminar flow is only possible when the water is moving very slowly through a smooth channel.  If the velocity increases or the bed becomes rough, the water flow changes to turbulent.  The multidirectional movement of water in turbulent is very effective both in keeping sediment suspended in the water and eroding the stream's channel.

Water velocity is the most important parameter in controlling the extent of erosion due to a stream.  When a stream is straight, the fastest flow occurs at the centre of the channel, as there is less friction there.  Minimum velocities occur at the banks and bed where friction is greatest.  Thus, a river with a semi-circular cross section will give rise to the fastest flow, as this cross section provides for the least surface in contact with the banks.  When a river is curved, however, the fastest velocities occur towards the outside of each bend, eroding the bank more effectively.  In addition, fastest flow occurs in rivers with smooth beds, as the zone of turbulence (and, hence, friction) is smaller. 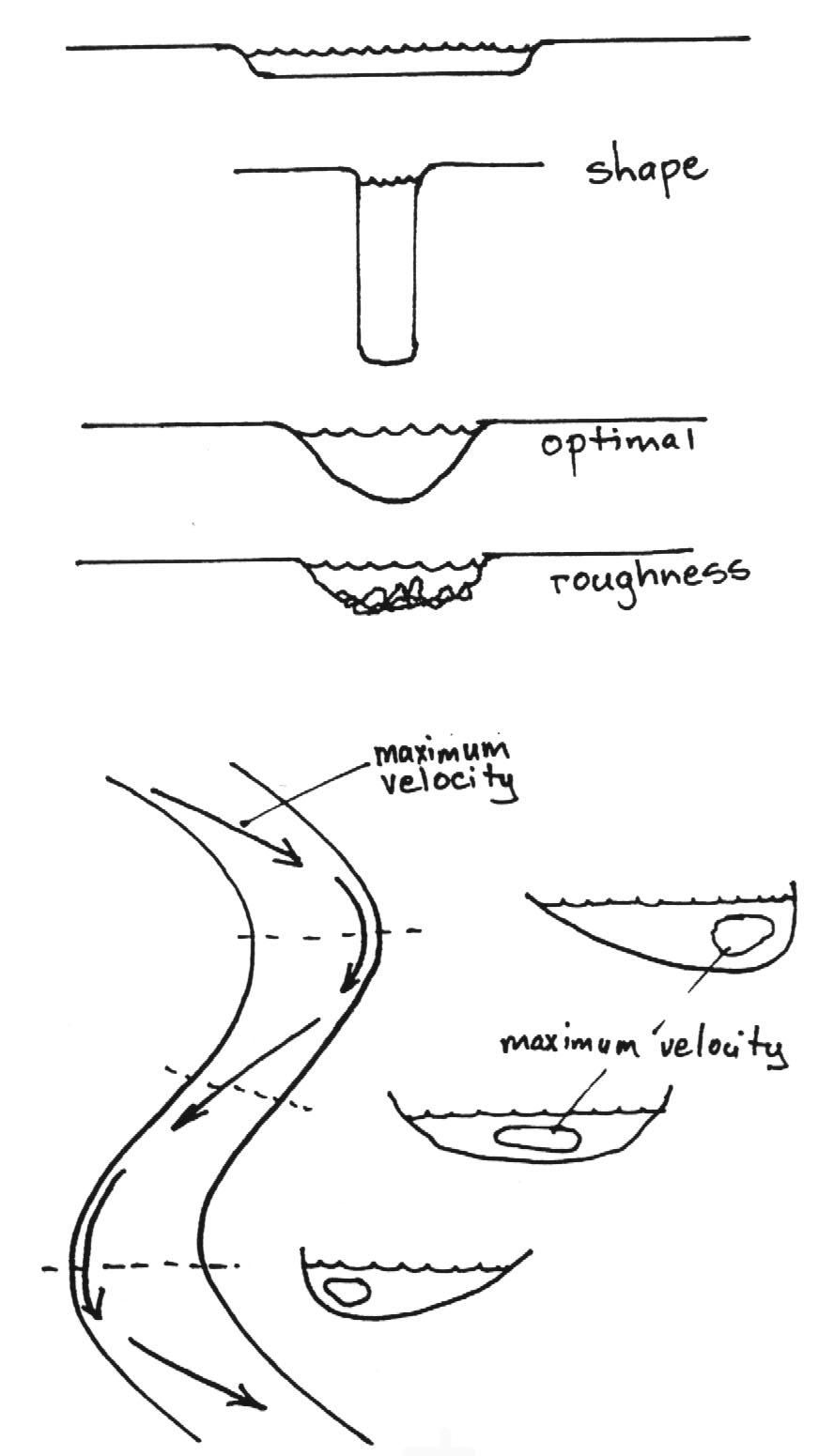 The most important and obvious factor controlling the velocity of flow is the gradient or slope of a stream channel. Parts of the Mississippi have gradients of only 10 cm/km. Mountain streams may have gradients of more than 40 m/km