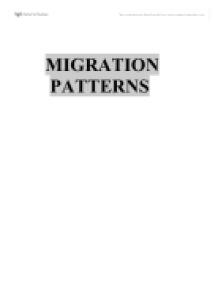 Type II Cases - Kabul to rural areas The civil war in the 80s forced many people in exodus to the areas surrounding the virtually destroyed city in order to survive such harsh situations. - Rwanda to Burundi Rwanda is a relatively small country in Africa and since 1994 many people migrated to Burundi, Tanzania and other neighboring countries because of the war between two different ethnic tribes: Hutu and Tutsis. Many people lived in shelters and survived with ONU's help. -Kosovo to Albania Because of the frequent wars in this area, thousands of people are forced to leave their country and seek asylum in the neighboring nations such as Albania until war is over. -Vietnam to Hong Kong to USA/Australia After the fall of Saigon more than 195000 Vietnamese arrived in Hong Kong on boat for temporary asylum, from which later on, 70,000 entered USA and 10,000 were accepted by Australia. These three cases are all international migrations caused by war or difficult political situations which force the people to fear for their lives and leave their homeland in seek for asylum in Neighboring countries, as Rwanda to Zaire, Kosovo to Albania and Vietnam to Hong Kong, although many Vietnamese have later on chosen to migrate further away. Type III Cases -Shanghai downtown to Surrounding areas Shanghai, as being one of the fastest growing Asian Mega cities, has undergone spectacular modernizations, during which process, has left many residents of Shanghai's old neighborhood homeless. ...read more.

They are: Illegal migration from Morocco or other African countries to Spain occur much more often during summer (warm weather) than winter (cold) because the illegal migrants travel by boat across the ocean and warm weather favors the journey, and risks of dying of cold is smaller. Also, in case the boat broke, it is relatively easier to swim in summer than in winter. Secondly there is the migration of villagers of Ecuador to larger cities seeking for jobs. The time they go away might depend on the harvest season, and other seasons of different jobs available in cities. Chapter 5 - EVALUATION: I think that this project has generally been fine since I've tried to find as much information as I could, to complete it. But I would like to make some improvements if I could do it again. Firstly, I would like to go through all parts of the Photo exhibition more thoroughly, because I had some difficulties finding out some destinations of migration flows. A defect about the exhibition itself is that although there are several types of migration present, I think that more examples of each type could be studied so comparisons can be made. I would suggest the following hypotheses for a further study of migration patterns: - All migrations from Rural to Urban areas are based on poverty and hunger. - Frequent international migrations will lead to a fast spread out of diseases. - Most migrations produce a compensatory counter-movement. - Females tend to migrate more than males within their country of birth, while males are much more likely to be involved in international migration. ...read more.