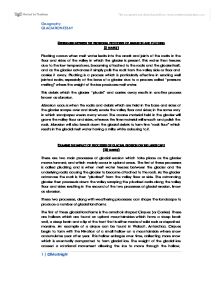 Distinguish between the erosional processes of abrasion and plucking
(5 marks)

Plucking occurs when melt water leaks into the crack and joints of the rocks in the floor and sides of the valley in which the glacier is present. This water then freezes due to the low temperatures, becoming attached to the rocks and the glacier itself, and as the glacier advances it simply pulls the rock from the valley side or floor and carries it away. Plucking is a process which is particularly effective in eroding well jointed rocks; especially at the base of a glacier due to a process called “pressure melting” where the weight of the ice produces melt water.

This debris which the glacier “plucks” and carries away results in another process known as abrasion.

Abrasion occurs when the rocks and debris which are held in the base and sides of the glacier scrape over and slowly erode the valley floor and sides; in the same way in which sandpaper wears away wood. The coarse material held in the glacier will grove the valley floor and sides, whereas the finer material will smooth and polish the rock. Abrasion will also break down the glacial debris to form fine “rock flour” which results in the glacial melt water having a milky white colouring to it.

These two processes, along with weathering processes can shape the landscape to produce a number of glacial landforms.

The first of these glacial landforms is the armchair shaped Cirques (or Corries) These are hollows which are found on upland mountainsides which have a steep back wall, a deep basin and a lip at the front that is either made of solid rock or deposited moraine. An example of a cirque can be found in Walcott, Antarctica. Cirques begin to form with the Nivation of a small hollow on a mountainside where snow accumulates year after year. This hollow enlarges over time, collecting more snow which is eventually compacted to form glacial ice. The weight of the glacial ice caused a rotational movement allowing the ice to move through the hollow, enlarging it further to form a true cirque. The movement of the glacial ice allows plucking to occur which steepens the back wall and also allows debris to be collected in the base of the glacial ice. This combined with any weathered rock collected in the Bergschrund will lead way to abrasion which will further deepen the hollow.

When two Cirques erode back to back, or along side each other, an Arête is formed which is often so narrow it is described as a knife edge ridge. An example of an Arête is Striding Edge in the Lake District where the arête itself is so narrow it is only wide enough for one person to walk along it. In some circumstances three cirques erode around a mountain top causing their back wall to retreat, resulting in the remaining central mass being steepened to form a pyramidal peak. At over 4,500 meters, the Matterhorn in Switzerland is a perfect example of this landform.

It is widely known amongst geographers that glaciers flow through a pre-existing river valley due to the force of gravity. As the glacier moves over the bedrock it erodes the valley floor and sides via plucking, abrasion and weathering processes which results in the valley becoming straighter, deeper and wider to develop into what is known as a Glacial Trough or U Shaped Valley

The spurs found in the valley which the river could not erode would also be eroded, or truncated, by the more powerful glacier to leave a near vertical cliff know as a Truncated Spur. These occur wither side of the hanging valleys where they meet the main valley. A example of which is Fisher Gill in the lake District.

Often found on the floor of glacial troughs are Roche Moutonnees. As the glacier passes over the rocky outcrop the pressure increases and so localized pressure melting occurs on the up-valley side. The pressure then begins to decrease once the glacier has moved over the outcrop allowing the ice to refreeze leading to the plucking and steepening of the downward valley side. This allows the landform to be a clear indicator of the direction in which the glacier was moving. The rocky outcrops of resistant rock are also smoothed and streamlined by abrasion on the up-valley side which often leaves striations, scratches, in the rock.

Any material that is collected by the glacier through the processes of plucking and/or abrasion must also be deposited at some point. This often occurs when the glacier begins to retreat as temperatures rise, though it can also occur as it advances, and can lead to landforms such as terminal, medial, lateral, ground and recessional moraines and erratics.

Moraines are build ups of glacial debris which is deposited into ridges. There are six types of moraine; however two of them (lateral and medial moraines) are formed by weathered rock.

Terminal moraines are mark, as their name suggests, the furthest advance of the glacier and would have been deposited by the snout as it began to retreat. A terminal moraine is a ridge of till which extends across the glacial trough and tend to be crescent shaped due to centre of the glacier being able to advance further as a result of the friction with the valley sides causes more rapid melting at the sides of the glacier

Recessional moraines run parallel to each other and to the terminal moraine and are formed when the glacier is at a stand still during its retreat.

Push moraine is simply a modified terminal or recessional moraine where the stones in the till are tilted upwards due to the glacier re-advancing in periods of lower temperature, allowing the ice to push the ridge of debris forward in front of the snout, tilting the stones upwards.

The last type of moraine is ground moraine. This is found all over the valley floor and is deposited in the retreat and re-advances of the ice.

Finally, erratic are individual pieces of rock which vary in size shape and rock type. Their geology is nearly always different to that of the rock in the area that they have been deposited. This is due to them being eroded; most likely by plucking, and then being carried as sub-glacial material before being deposited as the glacier retreated. Examples of Erratics can be found in Norber on the Yorkshire Dales, where blocks of Silurian Shale have been deposited on the local carboniferous limestone.