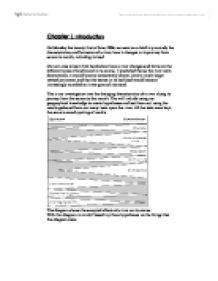 My hypotheses are:The character of the course of the River Bollin will change along its course to the mouth. The bed load will decrease and angularity of the materials found in the river will be reduced. The velocity

Chapter I, Introduction On Monday the twenty first of June, 2004, we went on a field trip to study the characteristics, and formation of a river, how it changes in its journey from source to mouth, including its load Our aim was to learn first hand about how a river changes and forms on the different types of land found in its course. I predicted that as the river went downstream, it would become consistently slower, cover a much larger wetted perimeter, and that the stones in its bed load would become increasingly rounded as it was ground into sand. This is my investigation into the changing characteristics of a river along its journey from the source to the mouth. This will include using my geographical knowledge to create hypotheses and test them out using the results gathered from our many tests upon the river. All the tests were kept the same to avoid spoiling of results. This diagram shows the accepted effects of a river on its course. With this diagram in mind, I based my three hypotheses on the things that this diagram state. My hypotheses are: 1. The character of the course of the River Bollin will change along its course to the mouth. 2. The bed load will decrease and angularity of the materials found in the river will be reduced. 3. The velocity and discharge will change along its course downstream. The sites Our study was of the River Bolin, at three different places along its course; the purpose being to gather information on how the characteristics of a river change as it travels from it's source to it's mouth. We arrived in school at normal time; we boarded a minibus, and then headed off to find the River Bolin. ...read more.

The weather was wet, with dark clouds and grey sky as well as light drizzle, also there was a small amount of flying insects found here, but not many as they are a characteristic of Stagnant, or slow moving water. Site 2, Langley Site two was further down hill, found at a place called "Langley". We arrived at Langley around 12:50am and headed off to the river, which was now larger water course due to input from many tributaries, there were many Confluences (the joining of one or more tributaries to form a single larger stream) along its course. Its course was less winding and it ran almost level with the brick buildings found on its left until it changed course and turned left downstream. To the right there was a large field. The river was on less of an incline and was slower moving, it also had a much larger width and a greater depth, the rocks found on its bed were less angular, more rounded and smaller than at the Macclesfield Forest. By this time the weather had improved, the sun was shining and the temperature was increasing. The air above the water at this site was teeming with biting insects Such as midges, which implies that there was stagnant water near by? Site 3, the Carrs The final site was a large river in a large area of flat land named "The Carrs". It was measured as the deepest of the three sites, and could submerge a person up to their waist, its bed was sandy, and its sides where cliffed. We had chosen this site as a great example of a Meander, a typical characteristic of the lower course of a river. ...read more.

As the efficiency of the river increased, the discharge increased, as less water was being blocked off along its course. This was aided by the fact that more water was being forced through the course as more tributaries added to it. Chapter VI, Evaluation Though the day was very much a success, there were many ways in which it could have been far improved. The very biggest limitation was that on the day, our teacher forgot to bring the flow meter. This made it difficult to get an accurate reading of the velocity of the water. Due to our lack of flow meter, we were forced to use a cork and a stop watch to measure how fast the water was travelling. The cork had a tendency to travel slower in the shallower, yet faster moving water of site 1, as it often got caught between stones in the bed. Later on, with deeper water the cork was not obstructed so travelled faster, regardless of the fact that the water was travelling slower than at site one. This gives the impression that the water is slower at the top of the mountain, were the incline is steeper. If we were to re do the experiment, I would use a flow meter. Another thing is that site 1 was chosen because of its accessibility, a not necessarily a perfect example of a river source. If the investigation was repeated, I would possibly travel further up hill to a faster flowing stream. Another thing, though difficult to remedy, was the fact that the metal chain used for measuring wetted perimeter was difficult to hold in place in deep water, I would have preferred to have weighed it down at the end. ...read more.