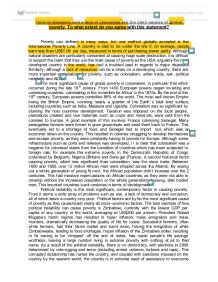 Natural disasters and a lack of resources are the main causes of global poverty. To what extent do you agree with this statement?

Natural disasters and a lack of resources are the main causes of global poverty. To what extent do you agree with this statement? Poverty can defined in many ways, but one method globally accepted is the International Poverty Line. A country is said to be under the line if, on average, people earn less than US$1.08 per day, measured in terms of purchasing power parity. Although natural disasters are particularly competent at causing huge scale destruction, it is difficult to support the claim that they are the main cause of poverty as the USA, arguably the most developed country in the world, has had a troubled past in regards to major disasters. Similarly, although a lack of resources can be a strain on a developing country, there are more important explanations for poverty, such as colonialism, unfair trade, war, political instability and AIDS. The most significant cause of global poverty is colonialism, in particular that which occurred during the late 19th century. From 1450 European powers began invading and colonising countries, culminating in the 'scramble for Africa' in the 1870s. By the end of the 19th century, European powers controlled 85% of the world. ...read more.

Similarly political instability can cause conflicts, most significantly, war. Afghanistan has a very low GDP per capita, less than $1000, as a result of a corrupt and unstable government, but more particularly war. After the original offensive against al-Qaeda and its supporters the Taliban, the war turned into a counterinsurgency effort, with the new Afghan government forming a coalition with NATO, in particular the USA and Britain. This has had huge repercussions for the country, not just the financial implications of fighting off the insurgent groups, but also the destruction caused to infrastructure, which has effectively ground the Afghan economy to a stand still. This has resulted in widespread poverty throughout the country. The third group of factors causing global poverty are socio-economic causes. These are less significant than the political factors, as often they are caused by political decisions, such as trading patterns and debt, and they have less severe consequences. That is not to say that they aren't important, Aids has huge implications and is currently wreaking havoc throughout Africa. An estimated 50million people have the disease and it is causing millions of child-headed families. As the children have to work to support their brothers and sisters, they can't gain an education and thus can't get improve their standard of living and earn a good wage. ...read more.

Often, natural disasters aren't the main cause of poverty but instead contribute towards it. The Asian tsunami of 2005 devastated many countries in the Indian Ocean, many of which were already in poverty. The disaster knocked the countries further back but it didn't cause their original poverty. There were other more significant factors causing the poverty (such as those mentioned above). Similarly, a lack of natural resources isn't a main factor but can contribute to poverty. Having an abundance of natural resources is a huge benefit for developing countries, such as the huge fortune that the OPECs are reigning in from oil wells. However, at the same time, the middle east is the centre of an increasingly large number of conflicts with many countries concerned with the future of their energy security. A lack of resources and natural disasters are both less significant than some of the other factors mentioned above, such as colonialism and political instability, however they are strong contributing factors. All of the causes mentioned are major contributors, some more significant than others. It is important to note that poverty is never caused by a single one of the factors mentioned above. Poverty is caused by a combination of factors, but as some are more significant than natural disasters and a lack of resources, it is clear that I disagree with the statement in question. ...read more.

This answer contains some very good explanations of the causes of poverty around the world and shows a sophisticated understanding of the role of history, politics and economics. However, it is unbalanced in that it gives very little consideration to the roles that natural disasters and lack of access to resources might play (which were key words in the question). Even if the author has strong opinions as to the real causes of poverty, it is still important that the answer should present this side of the argument before reaching a conclusion.