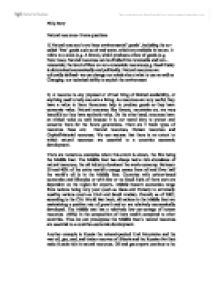 Natural resources- Exam questions 1) Natural resource's are those environmental 'goods', including the so-called 'free' goods such as air and water, which are available in nature. It refers to a stock (e.g. A forest), which produces a flow of goods (e.g. New tress). Natural resources can be divided into renewable and non-renewable; the level of flow on non-renewable resources(e.g. fossil fuels) is determined economically and politically. Natural resources are culturally defined- we can change our minds about what to use as well as Changing our technical ability to exploit the environment 2) A resource is any physical or virtual thing of limited availability, or anything used to help one earn a living. As resources are very useful, they have a value to them. Resources help to produce goods so they have economic value. Natural resources like forests, mountains etc. are very beautiful so they have aesthetic value. On the other hand, resources have an ethical value as well because it is our moral duty to protect and conserve them for the future generations. There are 3 Main types of resources these are: Natural resources, Human resources and Capital/Material resources. ...read more.

Another example is Russia the mineral-packed Ural Mountains and the vast oil, gas, coal, and timber reserves of Siberia and the Russian Far East make Russia rich in natural resources. Oil and gas exports continue to be the main source of hard currency. Russia is a leading producer and exporter of minerals, gold, and all major fuels. The Russian fishing industry is the world's fourth-larges. Imports from Russia to the USA were $19.4 billion dollars last year. During the transition to market economy The Soviets underwent the 'Brain drain' in which Some scientists, doctors and teachers fled to the West This depleted there Human resources making them fully reliant on there Natural resources. Fortunately the plentiful supply of natural resources has allowed it to become economically developed and the powerful superpower it is today. Although there are some examples, which suggest it is simply Natural resources that are need for economic development, there are others that disprove this. The first is Japan. Japan has inadequate natural resources to support its growing economy and large population. Although many kinds of minerals were extracted throughout the country, most mineral resources had to be imported Post war. ...read more.

The exports from the Natural resources would make the country's currency go up in value against other currencies, making your other exports more expensive and less attractive. The resource curse theory is clearly visible in Africa where areas, that have an abundance of natural resources, have been torn by civil strife, and suffer from endemic corruption (Nigeria). This theory Suggest that it is not natural resources that makes a country become economically developed, If anything it is a burden Upon then. Consequently Suggesting Human resources are more valuable assets in developing a country economically. I can conclude that The best solution for a country is a ratio of natural resources to Human resource, Like USA, so they have two means of steady economic development incase of crashes in the market. I believe the Curse theory Is only relative two third world countries where they can be exploited by other countries and not maximize the sale Of the Natural resources available. Finally there is an extent to which natural resources are beneficial to a countries economic development however they are not a necessity. Philip Berry ...read more.

Overall rating 3 out of 5 stars.
- The essay covers a lot of key points and also manages to explain a few more complex theories and concepts.
- Case studies are used appropriately and add detail and show some depth of knowledge and understanding. However, some details are a little blurred and there is little care given to the US one.
- Capital/material resources that are mentioned as one of three types are never mentioned within the essay.
- Grammar lets the essay down a great deal, including the careless use and mis-use of capital letters.