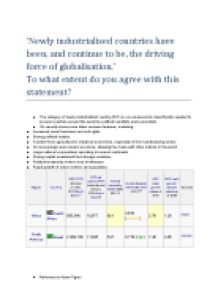 Newly industrialised countries have been, and continue to be, the driving force of globalisation. To what extent do you agree?

This has thus helped them gain a greater profit for what they export, and being a member of the organisation also means that should any trade disputes arise, the WTO is able to sort them out. This reduces the costs for the countries involved and helps things run smoothly. 1. This means that China is known as a Newly Industrialised Country, since most of its labour force is employed in either the secondary or tertiary sector. Its role in globalisation past that of TNCs has been major, since it now has the world?s highest amount of exported material. Because other countries now rely on China for their produce and China on other countries for their investment, if China were to lose its position in being the driving force of globalisation, the economy of the country may collapse, and this may also be the case for the investing countries. 1. The problem for China though is that despite the high growth of the country?s GDP, the gap between the rich and poor is increasing. The number of poor thought to be living on less than a dollar per day has fallen by a predicted amount of 150 million between 1990 and 1999. Also, because of the lack of jobs in the countryside compared to the cities where TNCs have set up factories, Rural-Urban migration has increased. ...read more.

China began its initial growth without the support of TNCs by joining the WTO and setting up its own plan of economic development. We currently rely on China for its exports and manufacturing since the labour and end product costs there are so cheap compared to England and America. 1. However, I don?t agree with the statement in terms of India?s initial development. Without TNCs such as BT, the country may not have been the driving force of globalisation in the past. However, thanks to the presence of TNCs, India is now alongside China in being a major player in globalisation thanks to its increasing population and living standards. Having many more people with high living standards in the country means that many more may be able to buy the advertised products of Western countries compared to the past. 1. I believe both countries ? among NICs ? play a large part in globalisation today. Many NICs have a workforce that is now made up of secondary or tertiary workers, and it is this that allows a country to move forward from simply sustaining itself to being able to sustain other countries as well as its own. This allows the country to build up a global network of relations wherein cultures, lifestyles and economies can be affected by the actions of another country. ...read more.