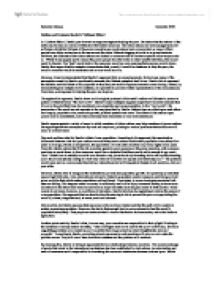 Outline and Evaluate Hardin's 'Lifeboat Ethics'. In 'Lifeboat Ethics', Hardin puts forward an argument against helping the poor. He claims that the nations of the earth may be seen as a series of lifeboats with limited resources. The richer nations are well-managed and self-sufficient, whilst the lifeboats of the poorer countries are overburdened and overcrowded, so many of their people have fallen out and are in the sea around the richer lifeboats begging to be let in or given handouts. However, the lifeboats of the richer nations are limited in resources and do not have space to allow anyone else in. Whilst it may appear just to rescue the poorer people from the water or share wealth with them, this would result in disaster. The 'boat' would sink or the resources would run out, meaning that everyone would drown. Hardin thus argues that his metaphor demonstrates that, overall, it would be disastrous to help the poor; the world's resources would be exhausted and no-one would survive. However, it can be demonstrated that Hardin's argument fails on several grounds. Not only are many of the assumptions made by Hardin questionably accurate, the lifeboat metaphor itself is too. ...read more.

The problem would recur and on a worse scale than before; international aid will bring about disaster to all countries, rich and poor alike. However, Hardin fails to recognize the link between poverty and population growth. It is precisely poverty that causes high birth rates. Also, international aid can be linked to population control measures and the type of aid given could be that which makes populations self-sufficient. Even today, in some developing countries birth rates are falling. This happens when a country is sufficiently well-off to enjoy increased literacy, to have some confidence in the future and when women have an improved status and can gain access to birth control. These events do not occur, however, in conditions of starvation. Hardin fails here by neglecting to realize the causes of over-population. His argument that we should allow the starving to die to prevent the poor overpopulating the world is, at best, misguided and, at worst, cruel and indecent. Not only this, but Hardin assumes that resources in the world are limited and that the earth will be unable to sustain a growing population. However, the fact is that enough food is now produced to feed the world's population adequately. ...read more.

Nations do not exist independently of one another; they actually hold very important economic relationships with one another. The situation is completely misrepresented when Hardin tries to claim that each country is self-contained in terms of resources. It is rather the case that members of wealthy nations have consumed vast quantities of the resources of poorer countries and added to political problems in various ways. Hardin is incorrect to claim that we are in well-managed self-sufficient lifeboats; a more appropriate metaphor may be that the wealthy nations are greedy pirate ships that raid the seas for their own excessive benefit, with little or no consideration for the boats of other countries. Many of the problems faced by developing countries today are the result of involvement by the rich nations. If we reconsider the metaphor in this way, it is perhaps possible to see how the richer nations of the world have an obvious link with poorer countries. One could go so far as to say that the systematic exploitation of poorer countries by wealthier nations provides a very good reason as to why the rich nations should take an active part in providing aid to poor countries. As suggested by Murdoch and Oaten in Population and Food: Metaphors and the Reality, "...the policies dictated by a sense of decency are also the most realistic and rational." . ...read more.

Overall, a very well written evaluation of Hardin's theory. It makes good points and is consistent in the argument it makes from the start. The final summary of the evaluation is excellent. The only thing that would strengthen this further is the use of examples as evidence.
5 Stars