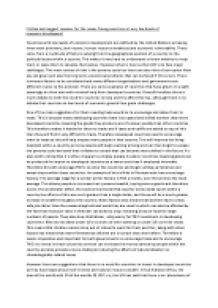 ﻿Outline and suggest reasons for the issues facing countries at very low levels of economic-development Countries with low levels of economic development are defined by the United Nations as having three main problems; low income, human resource weakness and economic vulnerability. These come from a multitude of factors varying from the geographical position of a country to the political factors within a country. This makes it very hard to understand or know whether to help them or leave them to develop themselves. However what is clear as that LDC?s do face major challenges. The most serious of risks is the poverty cycle but there are also risks of corruption from any aid given and also the long term economical problems that can be faced if this occurs. There numerous factors to be considered and many different organisations and governments see different routes to the problem. There are some examples of countries that have grown in wealth seemingly on their own with minimal help from developed countries. Overall therefore there is much debate to both the need for countries to help and the affect this has, although there is no debate that countries at low levels of economic growth face great challenges. One of the main suggestions for them needing help would be to encourage and allow them to trade. This is because many developing countries have less capital and skilled workers than more developed countries meaning the goods they produce are of a lower quality than other countries. This therefore makes it harder for them to trade and if taxes and tariffs are added on top of this then they will find it very difficult to trade. ...read more.

This cycle is a difficult one to get out with as often no matter how hard a person may try they are not told how to reduce the spread of illnesses so they may get one so are very likely to lose money because of that. Therefore this suggests that without help the country will remain under developed as many individuals won?t be able to escape poverty themselves and therefore help the country to develop as a whole. Therefore other countries need to help those combat diseases but also importantly provide education about both the disease and for developing essential life skills so that people may get skilled jobs so that they can earn money and even if they get ill will be able to provide for their families with the money they could have saved. Another way this could b done is through the donations of medicine although recently there have been reports of countries giving out-of-date medicines to African countries which could make the situation worse. It?s also important that this medicine gets to where it needs to be, the rural areas are the main areas but also shanty towns where diseases spread rapidly, like Shayelitsha in South Africa where 1.8million people live. However forms of helping developed countries such as aid have not necessarily been proven to work. There are large problems with donating drugs alone to countries as these cannot always reach the right people without individuals in the countries taking them there and even from that prevention can be as important as curing them. ...read more.

Overall therefore it can be concluded that a combination of factors mean that countries are in a low levels of development and that many of these are changeable if help from the developed world is forth coming. These include the lack of capital and money to build up businesses, much of which could come from aid and donations from other governments. There is also the problem of lack of strong, focussed governments in many LDC?s which requires pressure and nurturing from the UN and other organisation to help remove corruption and help set up reliable, strong-willed governments. In my opinion this is the main reason for lack of development as it can be seen as the main or at least a major factor in almost all the reasons that countries still haven?t developed, including lack of healthcare and sanitation, inability to administrate the use of natural resources and minimal trade. It?s also important to know that because of the climate and geography of the area it is difficult for the countries to have a green revolution which has been the beginning of every other countries development as well as the ones who have got themselves out of poverty. Therefore overall I agree largely with the statement that developed nations need to help LDC?s to get out of poverty and in my opinion the most effective way for this to occur would be through the pressure of the UN to create strong governments in each country as well as help to give the countries a chance to develop and administrate the removal and sale of their natural resource wealth. ...read more.