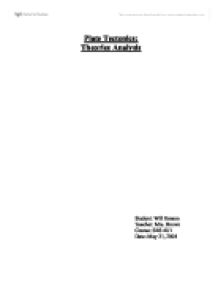 Plate Tectonics: Theories Analysis Student: Will Emann Teacher: Mrs. Brown Course: SES 4U1 Date: May 31, 2004 Since the beginning of human kind there has been a cloud of wonder regarding the natural processes and patterns of our planet. Scientist interested in this field through out the years, have developed many different theories to how our planet geological features have come about. The most widely accepted theory in this field is that of plate tectonics. For those who do not know much about the theory of plate tectonics; it states that there are twenty plates that cover most of the Earth's surface area. These giant slabs of rock are what is known as our lithosphere. These plates are said to slide on top of the asthenosphere (an inner layer of molten lava). A theory that can be explained by plate tectonics is a theory called continental drift. According to the theory of continental drift, the world was made up of a single continent through most of geologic time. That continent eventually separated and drifted apart, forming into the seven continents we have today. ...read more.

Important evidence that supports the theory of plate tectonics comes from the studies of the magnetic properties and the ages of igneous rocks on the ocean floor. Some igneous rocks contain minerals that are magnetic. These minerals provide a record of the direction of the Earth's magnetic field at the time when the molten lava that formed the rock, cooled. A discovery that geologists made was that some of the rocks also recorded reversals in the direction of the magnetic field. Geologists also record the ages of igneous rocks on each side of what what is known a mid-ocean ridge. Earth's mid-ocean ridges stretch around the planet. Tectonically and volcanically active, they are the places where new crust forms. The mid-ocean ridge system hosts one of the most complex environments on our planet.. The mid-ocean ridge is featured at a diverging plate boundary where magma rises between the separating plates. Another type of plate boundary that geologists have discovered is the convergent plate boundary. This means that the plates are actually moving towards each other. ...read more.

This Fault splits two thirds and San Francisco have so many problems with earthquakes. All of these examples are very supportive of the plate tectonic theory, but we also have to look at other theories as well, to get both sides of this mystery. There are obviously other theories about the changes in Earth's geological features. One theory states that the expansion of earth is caused by a gain in mass. A man named Jeffreys argued that the earth had cooled and contracted since its creation. Another man named Macdonald concluded that the Earth had expanded, others say the Earth is just randomly pulsating. Clearly there is not a lot of supporting evidence behind these theories. Most of theorists generally accept the theory of plate tectonics. The emergence of the theory of plate tectonics started a revolution in the earth sciences. Since then, scientists have verified and refined this theory, and now have a much better understanding of how our planet has been shaped by plate-tectonic processes. We now know that, directly or indirectly, plate tectonics influences nearly all geologic processes, past and present. Indeed, the notion that the entire Earth's surface is continually shifting has profoundly changed the way we view our world. ...read more.