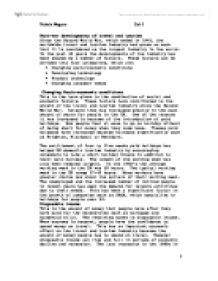 Post-war developments of travel and tourism

Post-war developments of travel and tourism Since the Second World War, which ended in 1945, the worldwide travel and tourism industry had grown so much that it is considered as the largest industry in the world. In the past 40 years the developments of the industry has been shaped by a number of factors. These factors can be divided into four categories, which are: * Changing socio-economic conditions * Developing technology * Product technology * Changing consumer needs Changing Socio-economic conditions This is the term given to the combination of social and economic factors. These factors have contributed to the growth of the travel and tourism industry since the Second World War. Leisure time has increased greatly in the past amount of years for people in the UK. One of the reasons it has increased is because of the introduction of paid holidays. Now people feel at ease to go on holiday without of being short for money when they come home. Theses paid holydays have increased seaside holidays significantly such as Brighton, Blackpool or Benidorm. The entitlement of four to five weeks paid holidays has helped UK domestic tourism industry by encouraging consumers to take a short holiday breaks in addition to their main holiday. The length of the working week has also been reduced largely. In the 1950's the average working week in the UK was 50 hours. The typical working week in the UK range 37-40 hours. Many workers have greater choice now about the pattern of their working week. The unemployed and the increased number of retired people in recent years has seen the demand for leisure activities due to their needs. This has been a significant factor in the growth of companies such as SAGA, which specialize in holidays for people over 50. Disposable income This is the amount of money that people have after they have paid for the necessities such as mortgage and household bills. ...read more.

These organisations include tourist boards and local authorities, which run facilities such as museums and tourist information centres. The British Tourist Authority is one of the key public sector organisations involved in supporting the UK tourism industry. July 25: The Development of Tourism Act 1969 receives Royal Assent and comes into force one month later, signalling the start of the British Tourist Authority (and the national boards for England, Scotland and Wales) sponsored by the Board of Trade This was the first piece of legislation specifically concerned with tourism. It is responsible for promoting Britain as a destination for incoming tourists. (Source: visitBritain.com) The voluntary sector are usually non-profit making or charitable are managed and operated largely by volunteers. An example is travel clubs and a wide range of countryside recreation and heritage pressure groups. Components of the travel and tourism industry * Travel agents * Tour operators * Transportation * Tourist attractions * Tourism development * Accommodation and catering Travel agents Travel and tourism providers are closely related and combine to provide facilities, products and services for people travelling away from their normal place of residence. A massive range of products and services is required to meet the travel needs of leisure and business tourist. Retail Travel agents sell a range of leisure travel products and services to outgoing, incoming and domestic visitors. They are usually located in a prime unit on the high street. They act as a link between customers and tour operators. They give customers advice on the right holiday. The role of the travel agent is changing. This is simply because of the increasing demand on Internet bookings for half the price and also teletext. But high street travel agents can give you their advice on holidays and which ones to beware of, and also help with any other queries. Travel agencies range from independent outlets, multiples and miniples. ...read more.