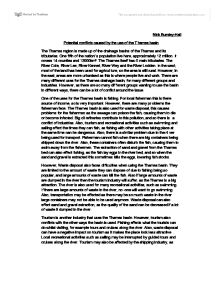 Potential conflicts caused by the use of the Thames basin

Nick Burnley-Hall Potential conflicts caused by the use of the Thames basin The Thames region is made up of the drainage basins of the Thames and its tributaries. One fifth of the nation's population live here, approximately 12 million. It covers 14 counties and 13000km�. The Thames itself has 5 main tributaries. The River Cole, River Lee, River Kennet, River Wey and the River Lodden. In the west, most of the land has been used for agriculture, so the area is still rural. However, in the east, areas are more urbanised as this is where people live and work. There are many different uses for the Thames drainage basin, for many different groups and industries. However, as there are so many different groups wanting to use the basin in different ways, there can be a lot of conflict around the issue. One of the uses for the Thames basin is fishing. For local fisherman this is there source of income, so is very important. However, there are many problems the fisherman face. The Thames basin is also used for waste disposal, this causes problems for the fishermen as the sewage can poison the fish, causing them to die or become infected. Big oil refineries contribute to this pollution, and so there is a conflict of industries. Also, tourism and recreational activities such as swimming and sailing effect the times they can fish, as fishing with other activities taking place at the same time can be dangerous. ...read more.

Sand and gravel being extracted from the river can also effect the tourism industry, as it can require large machinery which again decreases tourism. The tourism industry around the Thames area is suffering hugely due to all of the problems it faces, so there is no wander there is conflict surrounding the issue. The Thames basin is also used for recreational activities, such as sailing and canoeing. However these activities cause conflict with other groups of people who use the drainage basin. Fishing is a local traditional hobby as well as a source of income for some fisherman. As you could imagine, when people are fishing it can be dangerous for other activities in the river to take place, which often creates conflict. Also, waste disposal can effect recreation in and around the Thames, as high amounts of waste disposal will make the river less appealing visually, and activities will become less popular. The tourism industry also causes a problem for many recreational activities, as there are an increasing number of guided tours and cruises along the Thames, which restricts canoes being allowed on the river. Again at certain times the river is being used for importing and exporting goods, as big containers are being shipped up and down the river, and this again limits the times the river can be used for recreational activities. ...read more.

They are limited as to where and how much can be extracted, due to fish laying eggs in the bed. This has to be monitored carefully or else fish stocks will decrease which will upset the fishing industry. Also waste disposal can effect the quality of the sand and gravel being extracted, as sewage can mix in with the sand, which makes the sand effectively useless for building and other uses. The tourism industry also does not like the machinery involved in extraction, as it is loud, and visually pollutes the area. It often destroys the natural beauty of the place. Extraction can often make the riverbed unlevel, which some parts being deeper than others. This makes recreational activities such as sailing and canoeing dangerous, so there is often conflict here. Finally, there is a similar issue with shipping, as large boats cannot be transported down rivers that potentially have sandbanks in the river, as this is dangerous. In order for these conflicts to be avoided, the Thames drainage basin must be monitored and managed. The environment agency has been doing so for many years now, and have managed it so all users can meet there needs, without conflicting with other users. One of the main ways it has done this is by dividing the Thames into sections, so that some areas are dedicated to fishing, and some areas are dedicated to the industries surrounding the river. Fifty years ago, the river Thames was very polluted. However, today, the river Thames is the cleanest river that flows through a major city. ...read more.