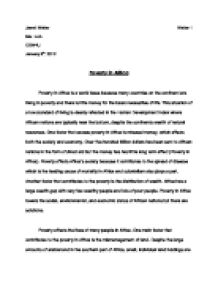 Jarrett Welter Welter 1 Mrs. Inch CGW4U January 9th, 2012 Poverty in Africa Poverty in Africa is a world issue because many countries on the continent are living in poverty and there is little money for the basic necessities of life. This situation of a low standard of living is clearly reflected in the Human Development Index where African nations are typically near the bottom, despite the continents wealth of natural resources. One factor that causes poverty in Africa is misused money, which affects both the society and economy. Over five hundred billion dollars has been sent to African nations in the form of direct aid but the money has had little long term affect (Poverty in Africa). Poverty affects Africa's society because it contributes to the spread of disease which is the leading cause of mortality in Africa and colonialism also plays a part. Another factor that contributes to the poverty is the distribution of wealth. Africa has a large wealth gap with very few wealthy people and lots of poor people. Poverty in Africa lowers the social, environmental, and economic status of African nations but there are solutions. Poverty affects the lives of many people in Africa. One main factor that contributes to the poverty in Africa is the mismanagement of land. Despite the large amounts of arable land in the southern part of Africa, small, individual land holdings are Welter 2 rare. In South Africa, most of the land is often in the hands of descendants of European settlers of the late 19th century and early 20th century. ...read more.

It is not the lack of education that keeps Africans from planting crops but the treatment of them by the landowners. Most African farmworkers are severely underpaid and the revenues accrued by the landowners are never shared with the workers. For example, in Zimbabwe only twenty percent of all fertile land is available to ninety percent of the population, while there are millions of people at risk of dying from malnutrition (The Effects of Poverty in Africa). Nearly all of Africa's environmental problems are caused by humans, though not necessarily Africans. Parts of the continent south of the Sahara are experiencing serious desertification problems as a result of mismanagement of natural resources. Two thirds of the continent is desert or drylands and experiences frequent and severe droughts. Environmental degradation occurs in most of Africa because people that are on the verge of starvation are unlikely to care about the fate of their environment. When people live in poverty they have little choice but to over-exploit the land. As they try to farm they end up using the soil's contents, leading to desertification. When the land eventually becomes uneconomic to farm, these people are often forced into internal and Welter 6 cross border migrations. Poverty negatively effects the environment because it causes soil erosion. Agricultural practices that tax the soil lead to soil erosion, which lowers crop yields and pollutes rivers and streams with silt. The accumulation of the silt from the loose eroded soil kills the fish in rivers and streams. Another cause of soil erosion is the cutting down of trees, in massive numbers, either for use as firewood or to sell for much needed money. ...read more.

In conclusion, the widespread effects of poverty in Africa have had substantial effects on the society, environment, and economy of Africa. There are many solutions to the issues affecting Africa but they are easier said than done. I believe a major issue that is keeping African nations from breaking out of poverty is the cultural differences on the continent. Governments and foreign donors should appreciate and recognize diversity and make sure any policies aimed at fighting poverty should be agreed by all tribes on the continent. Also Africans need to be more educated with birth control and Welter 10 they need to understand that having one or two children could save substantial amounts of money. Some Africans may choose to have lots of children because many Africans live or work as farmers and more children means more labour, also so they can ensure that they will have at least one son that will survive to support them. In 2000, the United Nations created a list called the Millennium Development Goals. This is a list of eight international goals that are expected to be reached by the year 2015, they include removing extreme poverty, reducing child mortality rates, fighting disease epidemics, and developing a global partnership for development. I believe that the United Nations most likely will not reach these goals by 2015, because it is only three years away and African nations are nowhere near where the goals expect to be. In the last twelve years very little progress has been made towards these goals, therefore it is very unlikely that those goals will be met within the next three years. If solutions work African nations could potentially move up to a newly industrialized country or to developed country status. ...read more.