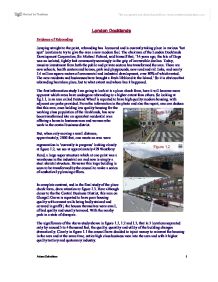 London Docklands Evidence of Rebranding Jumping straight to the point, rebranding has 1occurred and is currently taking place in various 'hot spot' locations to try to give the area a new modern feel. The chairman of the London Docklands Development Corporation, Sir Michael Pickard, said himself that, '16 years ago, the Isle of Dogs was an isolated, tightly knit community seemingly in the grip of irreversible decline. Today, massive investment from both the public and private sectors has transformed the area. There are new schools, health centers and homes, park and playgrounds, new road and rail links, and nearly 1.4 million square meters of commercial and industrial development, over 80% of which rented. The new residents and businesses have brought a fresh lifeblood to the Island.' So it is obvious that rebranding has taken place, but to what extent and where has it happened. The first information study I am going to look at is a place check form, here it will become more apparent which areas have undergone rebranding to a higher extent than others. So looking at fig.1.1, is an area called Felstead Wharf is reported to have high quality modern housing, with adjacent car parks provided. ...read more.

The red areas are representative of completely non regenerated areas, which generally contain low quality housing inhabited by lower class workers. So to conclude this sub-heading, on the whole, a large area of the Isle of Dogs has undergone rebranding through regeneration,it has mainly occurred in regions close to the river. These areas are generally speaking, residential high quality flats and houses aimed at the business man who perhaps works in the Central business district as this is a prime location; close to work and in a pleasing environment. The regenerated areas further inland are more often business related, with aesthetically pleasing offices and high quality shops infiltrating the area. Some however is regenerated housing, offering high quality housing at a slightly lower price for middle to upper middle class workers. There are still some areas which remain untouched by the rebranding scheme put together by the LDDC (London Docklands Development Corporation) in 1997. These areas have assumed the position of low quality housing with high crime rates according to the local council. These areas suffer as businesses often relocate from this area because expendable income held by most residents in this area is low. ...read more.

Areas still in need of rebranding As shown in figure 2.3, the green highlights on the map are representative of the highly rebranded areas 80% or more. The blue areas represent areas that have undergone between 40 to 80%. The red areas are significant of 0 to 40% regeneration. Although there are a few areas which are yet to undergo redevelopment, on the whole the Isle of Dogs has seen a greater percentage or rebranding per square foot than most other residential areas in London. Because of this, it is important that the whole region of the Isle of Dogs is not lost under a sea of white walls and tinted glass. Some of the area should remain as working class housing with dirty red bricks with a musky feel to it. If all of it is lost, then it is possible that the area would lose its routes and its heritage and the great docklands would be remembered as something completely different than what it should. But the definition of rebranding is exactly that, so in terms of rebranding, there is roughly 35 percent of the Isle of Dogs, yet to be rebranded. Adam Robottom 2 Adam Robottom 1 ...read more.

A good overview of rebranding in the Docklands area. This report refers to primary and secondary data to demonstrate the success of rebranding. To improve, further secondary data could be used as evidence for points made. It would also be useful to see a conclusion.
4 stars