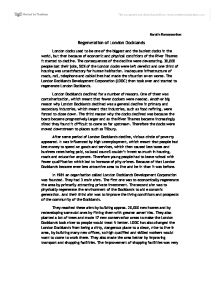 London docks used to be one of the biggest and the busiest docks in the world, but then because of economic and physical conditions of the River Thames it started to decline. The consequences of the decline were devastating. 30,000 people lost their jobs, 50% of the London docks were left derelict and one third of housing was unsatisfactory for human habitation. Inadequate infrastructure of roads, rail, telephone and cable lines had made the situation even worse. The London Docklands Development Corporation (LDDC) then took over and started to regenerate London Docklands.

London Docklands declined for a number of reasons. One of them was containerization, which meant that fewer dockers were needed. Another big reason why London Docklands declined was a general decline in primary and secondary industries, which meant that industries, such as food refining, were forced to close down. The third reason why the docks declined was because the boats became progressively larger and as the River Thames became increasingly silted they found it difficult to come so far upstream. Therefore the docks were moved downstream to places such as Tilbury.

After some period of London Docklands decline, vicious circle of poverty appeared. It was influenced by high unemployment, which meant that people had less money to spend on goods and services, which then caused less taxes and business rates being paid, so local council couldn’t invest so much in housing, roads and education anymore. Therefore young people had to leave school with fewer qualification which led to increase of pity crimes. Because of that London Docklands became even less attractive area to live and be in than it was before.

In 1981 an organisation called London Docklands Development Corporation was founded. They had 3 main aims. The first one was to economically regenerate the area by primarily attracting private investment. The second aim was to physically regenerate the environment of the Docklands to aid economic generation. And their third aim was to improve the living conditions and prospects of the community of the Docklands.

They reached these aims by building approx. 20,000 new homes and by redeveloping some old ones by fitting them with greater amenities. They also planted a lot of trees and made 17 new conservation areas to make the London Docklands look nicer so people would treat it better. LDDC has also changed the London Docklands from being a dirty, dangerous place to a clean, nice to live in area, by building many new offices, so high qualified and skilled workers would want to come to work there. They also made the area better by improving transport and shopping facilities. The improvement of shopping facilities was very important to the local economy, because people started to spend more money on goods so therefore more taxes and business rates were being paid which meant that local council had more money to invest in housing, roads and education and that way make the vicious circle of poverty to disappear.

I personally think that everything what LDDC did was a success, because they completed all their aims and made the area look much nicer and better to live in than it was before. On the other hand, there are still some people, who used to work on the docks, who are unhappy with all those improvements because they lost their jobs and there aren’t any available jobs for them anymore. But it’s impossible to make everyone happy, so as long as the majority win, in my opinion, you can call it a success.