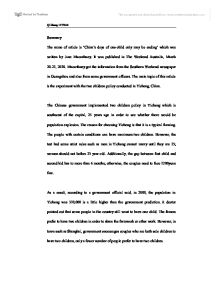 Research on China's population. The name of article is Chinas days of one-child only may be ending which was written by Jane Macarthney. It was published in The Weekend Australia, March 20-21, 2010.

The name of article is ‘China’s days of one-child only may be ending’ which was written by Jane Macarthney. It was published in The Weekend Australia, March 20-21, 2010. Macarthney got the information from the Southern Weekend newspaper in Guangzhou and also from some government officers. The main topic of this article is the experiment with the two children policy conducted in Yicheng, China.

The Chinese government implemented two children policy in Yicheng which is southwest of the capital, 25 years ago in order to see whether there would be population explosion. The reason for choosing Yicheng is that it is a typical farming. The people with certain conditions can have maximum two children. However, the test had some strict rules such as men in Yicheng cannot marry until they are 25; women should not before 23 year-old. Additionally, the gap between first child and second kid has to more than 6 months; otherwise, the couples need to face 1200yuan fine.

To sum up, the one child policy in China is not necessary to keep implementing. The public have already accepted one child in family. For the second child, the couples have to spend more money and energy to raise.

However, population control also has disadvantages. It would lead to an aged trend of population. For instance, in China, many cities have the tendency to become an aging population city. The government is concerned about it. The reason is that the aging population will create the decrease of labor force, then harm to economics.

Right of people is precious. However, the right must relate to the situation of their country. The countries in the world face the different population problem. For example, China’s population is very large therefore the governments implement the one child policy in order to control the population. Australia’s population is small compared with China, so the Australian government encourages citizen to have more children.

The state policy must be suitable for the notional situation. People should consider both their own situation and the national situation. Every body has the responsibility to obey the law and policy. For instance, the one child policy is appropriate for China. The population in China is really big. This policy can control the population, and is also good for the people. As the population becomes smaller, people can use more resource.

For my own family experience, I am an only child in my family and have 8 cousins. My parents provide anything which I want and give all the attention on me. In some case, the child comes from one-child- family is selfish, standoffish. He/She doesn’t care of other people’s feeling. He/she just considers their own situation and force on him. Additionally, he/she does not help their parents to do the housework at home.

Sometimes I can’t find someone to play with. In some situation, the child without siblings may feel alone. Their parents are busy with their job. They have not spare time to take care of their child. This may be leading the child become more introverted. They are afraid of communicating with strangers and less confident. Therefore they don’t have many close friends.

The cost for one child is cheaper than the family has two children. Currently, the cost for kid in China is very experience especial in town. The one child family can reduce the cost of raising a child. Therefore, the one child policy is unnecessary to continue implementing in the future.