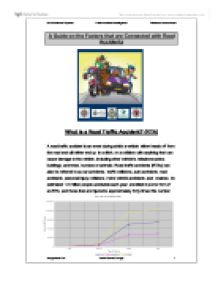 A Guide on the Factors that are Connected with Road Accidents What is a Road Traffic Accident? (RTA) A road traffic accident is an event during which a vehicle either heads off from the road and will either end up in a ditch, or a collision with anything that can cause damage to the vehicle, including other vehicle's, telephone poles, buildings, and trees, humans or animals. Road traffic accidents (RTAs) can also be referred to as car accidents, traffic collisions, auto accidents, road accidents, personal injury collisions, motor vehicle accidents, and crashes. An estimated 1.2 million people worldwide each year are killed in some form of an RTA, and those that are injured is approximately forty times this number Causes of Road Traffic Accidents Environmental Factors Rain Rain can effect a driver's perception and produces visibility changes through its contact on headlamps, windshields, the road itself and road markings. The rain can also affect the driver's vision visibility through the windshield. The windshield wipers are never 100% effective, the splashing of the rain and the windshield wipers block vision and objects on the road. Wipers can also leave a smear on the windscreen and only clear 2/3 of the windshield from rain. When rain is combined with dirty water or slush thrown up from the road by other drivers, windshields can quickly become dirty. Water reduces the reflectivity of most materials. Less light falling on the object is reflected back, so the objects appear darker and have lower contrast. Pedestrians in dark clothes would become even darker and could be more difficult to see. Sun The sun can be a very dangerous factor for drivers as it can produce a glare by reflecting off the road and into the driver's direct field of vision, making the driver temporally blind. The sun can reflect off the drivers or other vehicles windscreen and other reflective surfaces can decrease the driver's ability to view traffic lights, signs and other road traffic. ...read more.

Air bags need to inflate at a fast rate to ensure that they are fully inflated by the time a persons body begins to move in reaction to the collision, depending on the size on the air bag will depend on how long it needs to inflate, the larger the air bag the longer it needs to inflates. European air bags can hold up to 35 litres of gas propellant and can fully inflate in 25 milliseconds, which means they can expand up to 160mph. The area of a space within the car that is taken up by the airbag as it inflates is known as the 'airbag deployment zone'. Sensors within the vehicle monitor the direction and severity of an impact and release the airbag if the severity and direction permits it. Normally for an air bag to be released then the impact should be greater than 20mph and in a frontal direction, rear end collisions should not be enough to release an air bag. There are three components to an air bag: * The bag itself is made of a thin, nylon fabric, which is folded into the steering wheel or dashboard or, more recently, the seat or door. * The sensor is the device that tells the bag to inflate. Inflation happens when there is a collision force equal to running into a brick wall at 10 to 15 miles per hour. A mechanical switch is flipped when there is a mass shift that closes an electrical contact, telling the sensors that a crash has occurred. The sensors receive information from an accelerometer built into a microchip. * The air bag's inflation system reacts sodium azide (NaN3) with potassium nitrate (KNO3) to produce nitrogen gas. Hot blasts of the nitrogen inflate the air bag. Since model year 1998, all new cars have been required to have air bags on both driver and passenger sides. ...read more.

This is not to say the quality of driving is worse, in fact it should be better. It is the fact that they spend more hours on the road than most other users, which makes it statistically more likely that they will be involved in an accident. 9. Security: If the driver has an immobiliser, alarm, steering lock, and detachable stereo then this will result in a significantly lower insurance premium, particularly in areas that have higher crime rates such as cities. 10. The Insurer: Some companies and brokers may seem to offer a lower insurance premium and there could be certain reasons for this that may not be helpful to the driver. For example, some companies will load the excess payable in the event of an insurance claim to �250 or more, the driver may have a reduced total amount payable for items such as stereo equipment, or will not receive a courtesy car if their car is involved in an accident. 11. Policy additions: If there are a number of people named on an insurance policy then the driver is also covering their risk as well. To reduce the driver's premium they can restrict the number of people on their policy. Uninsured Drivers Many drivers assume that the main point of motor insurance is to protect them over the value of their investments made into their vehicle if they have an accident, but the truth is motor insurance is needed due to the harm that drivers can to do others. The UK has one of the highest levels of uninsured driving in Europe, with more than one million uninsured drivers on our roads. Last year the Motor Insurers' Bureau (MIB) handled more than 41,000 claims from victims of road accidents caused by untraced and uninsured drivers. Uninsured driving now costs Britain more than �500 million per year and adds around �30 to the insurance premium of honest motorists as it is them that pay this, due to the constant rising of claims ?? ?? ?? ?? BTEC National Diploma Traffic Accident Investigation Rebecca-Louise Wood Assignment One South Downs College 1 ...read more.