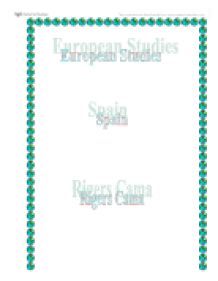 This project on European Studies will be on the beautiful country of Spain and its football history. My project will include the three must topics and anther five compulsory topics which consist of: * National sport/ Famous sport people * Tourism * Language & culture (festivals ect) * History -key dates/ events in the history of the country * Geography& climate Most of the compulsory topics I will be doing an overview of the topic since my project will be based mostly on the National sport/ Famous sport people of the country. In this project I will explain in detail the football history of country and its high rated football teams. My 'Language Model' which includes a two hundred word essay of your target language, will be on Spanish based on the topic of 'Self, family and friends. I will lay out my topics in three different layouts, which will be tourist brochure for 'Tourism', an historical diary for 'National sport/ Famous sport people' and a mini dictionary of useful phrases for the 'Language Module'. The next few pages will be on my Spanish European Project so I hope you like it and find it interesting. Spain is most famously know for its beautiful beaches however it is also know for its great football team and its football tradition. Alejandro McKay formed Spain's first club, Huelva Recreation Club, on 23 December 1889, featuring a mix of local Spanish talent and Englishman from expatriate side Rio Tinto FC. The team lifted their first trophy by beating s side comprised of English colony workers and became Recreativo de Huelva in 1903. Spain's first club might have formed in 1889 but it wasn't until 1934 when they qualified for their first world cup. Spain might have the greatest teams and biggest stars in the world but something, somehow always goes wrong for them in big competitions such as the World Cup and European Cup. ...read more.

Anella Ol�mpica is easily reached by bus. Barcelona Attractions: Moll de la Fusta- The Moll de la Fusta in Barcelona is a long wooden boardwalk, running along the Passeig de Colom shorefront. This is an ideal place for a walk by the sea and there are plenty of benches to sit on an admire the views. The nearest train stations to the Moll de la Fusta are Barceloneta and Drassanes. Barcelona Attractions: Pla�a Del Pi and Pla�a Sant Josep Oriol - These two squares in Barcelona are situated next to each other in the Gothic Quarter of Barcelona. They are full of history and are surrounded by many good caf�s. The lively squares lead into each other and are often home to art and food markets, as well as street performers and musicians. The nearest train stations are Liceu and Catalunya. Barcelona Attractions: Pla�a Espanya - The Pla�a Espanya in Barcelona is the old gateway to the city and is situated in the L'Eixample neighbourhood. It features a large fountain that was designed by Josep Maria Jujol and inspired by Gaud�. The nearest train stop in Espanya. Barcelona Attractions: Port Ol�mpic (Olympic Port) - Opened in 1992 for the Olympic Games, the Port Ol�mpic is a popular entertainment and leisure attraction. With many restaurants, bars, shops and nightclubs, Port Ol�mpic is situated underneath two large and impressive skyscrapers and you are able to rent speedboats around the port. Ciutadella is the nearest train stop. Barcelona Attractions: Rambla de Canaletes - The Ramblas is a popular part of the city and the Rambla de Canaletes is a walkway, with newspaper kiosks selling newspapers from all over the world. There is also a small fountain (Font de Canaletes) which has the legend that if you drink from it, you will revisit the city of Barcelona in the future. Nou Camp- Nou Camp is the home ground of Barcelona which holds 90,000 people, so why not come and see the lights of Puyol, Ronnaldinio, E'tos, Deco and Larson playing to defend their title. ...read more.

Situated in the Territory of Bizkaia, the city is surrounded by fertile landscapes, with forest, mountains, beaches, and steep coasts, that make Bilbao an excellent destination for any traveller. The modern network of transport and roads brings the nearby Basque capitals like Vitoria and San Sebastian much closer. Art and Culture Bilbao's culture calendar is hard to resist; it has two of the best art galleries in Spain, six themed museums, countless contemporary art exhibitions and a continuous series of shows and performances, such as opera, symphony orchestras, theatre, dance, cinema, easy listening, pop and rock 'n' roll. Children The programme of shows, leisure and cultural activities does not forget your youngsters. An intensive programme all year round includes theatre and musicals, increasing during Carnival, Semana Grande and Christmas; times when children take the leading role. Congresses and Business Bilbao is ready to host any kind of conventions or professional meeting all their needs. Historically, the city has played host to many conventions and it has held business conferences in all economic and financial fields. Food and Whine The industrial city of Bilbao radiates class. Shopping Shopping for antiques, typical ceramics, exquisite cakes and pastries or the latest fashions is one of the options offered by the shopping centres and shops of Bilbao. Going shopping in Bilbao is a unique occasion for enjoying the architectural heritage of the city and whilst out you can enjoy the popular pintxos in one of the many taverns or cafes lining in the streets. Sports and Nature Playing sports is also easy in Bilbao. The bicycle lanes keep on growing in the city, and they will soon reach 30 kilometres. Other sporting options include swimming pools, gyms, and golf, not to mention jogging or walking thought the streets and parks. Youth Avant- garde art, fashion, music and leisure are an everyday affair in Bilbao, a city filled with trendy shops, great pop and rock concerts, and excellent venues for live performances. ...read more.