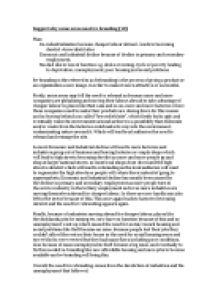 Suggest why some areas need re-branding

﻿Suggest why some areas need re-branding (10) Plan: De-industrialisation because cheaper labour abroad - leads to becoming derelict +brownfield sites Economic and industrial decline because of decline in primary and secondary employment. Needed due to loss of function e.g. docks or mining. Cycle of poverty leading to deprivation, unemployment, poor housing and social problems. Re-branding is the referred to as Rebranding is the process of giving a product or an organization a new image, in order to make it more attractive or successful. Firstly, some areas may fell the need to rebrand as because more and more companies are globalizing and moving their labour abroad to take advantage ...read more.

now have no function because of this and so unemployment went up which caused the need for social/council housing and social problems like theft became an issue. Because people lost their jobs they couldn?t afford the rent on their house so the need for social housing arose and tower blocks were erected but they had many flaws including poor conditions. Also because of mass unemployment, theft became a big issue, and eventually to fix this needed re-branding like new affordable housing and more jobs to become available and re-branding will bring this. Overall, the need for rebranding comes from the dereliction of industries and the unemployment that followed. ...read more.

Overall, a satisfactory attempt. However there is repetition of one major point rather than exploring several different reasons why rebranding can be required. Examples would support this answer.
3 stars