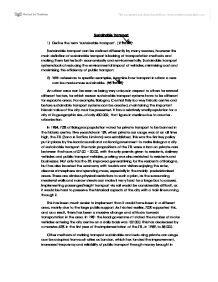 Implementing passenger/freight transport via rail would be considerably difficult, as it would be hard to preserve the historical aspects of the city with a train line running through it. This has been much easier to implement than it could have been in a different area, mainly due to the large public support. As I stated earlier, 70% supported this, and as a result, there has been a massive change and attitude towards transportation in the area. In 1981 the local government stated the number of motor vehicles entering the city centre on a daily basis was 152 000. This has decreased by a massive 62% in the first year of the implementation of the ZTL, in 1989, to 58 000. Other methods of making transport sustainable and reducing private car usage can be adopted from such cities as London, which has funded the improvement, increased frequency and reliability of public transport through money brought in from the introduction of congestion charges. ...read more.

This then snowballs into an even larger problem as those who turn toward cars congest all the road networks in and around CBD's and such places, whilst at the same time contributing heavily towards global warming. Tokyo is an extreme example of this, with congestion levels reaching so high, it can take hours to get just miles into the city, and also creating what is known as the 'urban heat island effect'; a densely populated area with a significantly larger temperature than the surrounding areas. Rising house prices in central areas encourages people to move to the suburbs where property is cheaper. This makes journeys longer and, ultimately means due to the convenience people favour their own cars as opposed to public transport. Another factor driving people away from public transport is the privatisation of many bus/train/tram companies. As there are rarely more than three or four direct competitors in the privately owned public transport sector, these companies tend to monopolise and charge expensive amounts to customers; a factor not helped by the decrease in financial support from the government. ?? ?? ?? ?? ...read more.