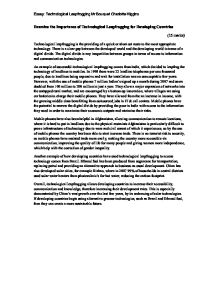 Examine the Importance of Technological Leapfrogging for Developing Countries (15 marks) Technological leapfrogging is the providing of a quick or short-cut route to the most appropriate technology. There is a clear gap between the developed world and the developing world in terms of a digital divide. The digital divide is any inequalities between groups in terms of access to information and communication technologies. An example of successful technological leapfrogging comes from India, which decided to leapfrog the technology of landlines to mobiles. In 1998 there were 22 landline telephones per one thousand people, due to landlines being expensive and wait for installation was an unacceptable few years. ...read more.

They have allowed from the an increase in income, with the growing middle class benefitting from outsourced jobs in IT & call centres. Mobile phones have the potential to narrow the digital divide by providing the poor in India with access to the information they need in order to maximise their economic outputs and minimise their risks. Mobile phones have also been helpful in Afghanistan, allowing communication to remote locations, where it is hard to put in landlines due to the physical restraints Afghanistan is particularly difficult to prove infrastructure of technology due to wars and civil unrest of which it experiences, so by the use of mobile phones the country has been able to start increase trade. ...read more.

Ethanol fuel has been produced from sugarcane for transportation, replacing petrol and providing an alternative approach to business-as-usual development. China has also developed solar cities, for example Rizhao, where in 2007 99% of households in central districts used solar water heaters from photovoltaic's for hot water, reducing the carbon footprint. Overall, technological leapfrogging allows developing countries to increase their accessibility, communication and knowledge, therefore increasing their development rates. This is especially demonstrated by China's vast growth over the last few years, by its embracing of solar technologies. If developing countries begin using alternative greener technologies, such as Brazil and Ethanol fuel, then they can create a more sustainable future. ?? ?? ?? ?? Essay: Technological Leapfrogging Mr Bouquet Charlotte Higgins ...read more.