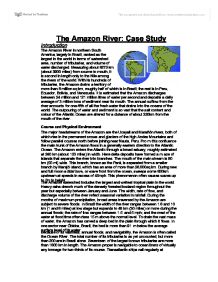 The Amazon River: Case Study Introduction The Amazon River in northern South America, largely in Brazil, ranked as the largest in the world in terms of watershed area, number of tributaries, and volume of water discharged. Measuring about 6275 km (about 3900 miles) from source to mouth, it is second in length only to the Nile among the rivers of the world. With its hundreds of tributaries, the Amazon drains a territory of more than 6 million sq km, roughly half of which is in Brazil; the rest is in Peru, Ecuador, Bolivia, and Venezuela. It is estimated that the Amazon discharges between 34 million and 121 million litres of water per second and deposits a daily average of 3 million tons of sediment near its mouth. The annual outflow from the river accounts for one-fifth of all the fresh water that drains into the oceans of the world. The outpouring of water and sediment is so vast that the salt content and colour of the Atlantic Ocean are altered for a distance of about 320km from the mouth of the river. Course and Physical Environment The major headstreams of the Amazon are the Ucayali and Mara��n rivers, both of which rise in the permanent snows and glaciers of the high Andes Mountains and follow parallel courses north before joining near Nauta, Peru. ...read more.

Over time the valley becomes deeper and wider: A gorge is a steep-sided river valley, which is very narrow and deep. Most gorges have rocky sides. The river cuts this deep valley by erosion. Gorges are created over thousands of years. A waterfall is formed where water flows over a cliff or very steep drop in the river's bed. Waterfalls develop in several ways. Different rates of erosion where a resistant layer of rock in a streambed overlies softer layers is the principal manner. Subsequent erosion of the softer rock by the falling water undermines and periodically breaks off portions of the harder cap rock. Some of the largest cataracts in the world, Niagara Falls in North America and Victoria Falls in Africa, for example, originated in this way. Waterfalls are usually found in the upper course of a river in the hills or mountains. The Dunn's River Falls in Jamaica is the only known waterfall which forms the mouth of a river as it enters the sea. With interlocking spurs, the volume of water is small and energy is used to overcome friction therefore, the river has little energy to erode the banks. The river thus has to flow past any barrier in its path such as spurs. ...read more.

When a river overflows its banks, the rate of flow is less than that in the channel, and silt is deposited on the banks. With each successive flood the levee increases in size so that eventually the river may be above the surface of the surrounding flood plain. Notable levees are found on the lower reaches of the Mississippi in the USA and the Po in Italy. Rivers move slowly at the river mouth. The river carries a lot of sediment and mud. The river deposits its sediment and mud at its mouth. This sediment and mud spreads out into a fan- like shape, or delta, across the mouth of the river. If the force of the sea tides and water is not very strong, the mud deposits cannot be washed away. Instead, the deposits break up the flow of the river water into many smaller channels. The delta gradually gets bigger and bigger. The new land is made up of billions of pieces of mud, sediment and small rocks. This sediment has been carried by the river from its source to its mouth. A delta is often triangular in shape. It gets its name from the Greek letter 'delta' which is shaped like a triangle. Not all deltas look the same, but they all split the river into many different channels. The channels in a delta are called distributaries. ...read more.