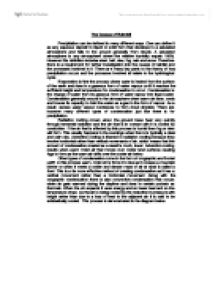 The Causes Of Rainfall

The Causes of Rainfall Precipitation can be defined in many different ways. One can define it as any aqueous deposit in liquid or solid form that develops in a saturated atmosphere and falls to the ground generally from clouds. A saturated atmosphere is any atmosphere where the relative humidity equals 100%. However this definition includes sleet, hail, dew, fog, rain and snow. Therefore there is a requirement for further investigation into the causes of rainfall and the processes involved in it. There are many key parts to the theory of how precipitation occurs and the processes involved all relate to the hydrological cycle. Evaporation is first the process where water is heated from the surface of the earth and rises in a gaseous form of water vapour until it reaches the sufficient height and temperature for condensation to occur. Condensation is the change of water from its gaseous form of water vapour into liquid water. Condensation generally occurs in the atmosphere when warm air rises, cools and looses its capacity to hold the water as a gas in the form of vapour. As a result, excess water vapour condenses to form cloud droplets. There are however many different types of condensation just like there is for precipitation. ...read more.

These tiny, minute water droplets must first condense onto these even tinier dust particles, which act as a nucleus for the raindrop. Water droplets may grow as a result of additional condensation of water vapor when the particles collide together. If enough collisions occur to produce a droplet with a falling velocity which can exceed the cloud updraft speed, then it will fall out of the cloud as precipitation. However there is a more efficient mechanism for the creation of precipitation siezed droplets of water which leads to the growth of ice crystals at the expense of the water vapor present in a cloud. These crystals may fall as snow, or melt and fall as rain. The likely thing that happens is that they may start to fall as slow ut mostly end up melting into raindrops. They can fall in many different sizes but are normally under or about 2-3mm in size. They also have different shapes and the sizes are shown below in the small diagram. As the raindrops fall, they can be distinguished by the mechanisms that cause the initial uplift of the air. There are three main types of mechanism the first of which is the convergent and cyclonic rainfall. This can also be described as frontal rainfall. ...read more.

This may be the reason for the lightning to occur but thunder is certainly the sound of pressure waves created by the heating of air along the lightning flash. The diagram above shows the simple version of convection precipitation. However we would expect to see the lightning at the base of the cloud and the charges going from positive to negative down the cloud from top to bottom as the ice crystals fall to induce a positive charge on the earth. We can see that the processes of rainfall are very in depth. The start of the progression of evaporation to condensation, raindrop formation and precipitation is a long line of chemical and physical processes that in everyday life we do not usually think about. The different types of rainfall and the origins behind the creation of thunder and lightning are all very complex and are all due to the convection currents of warm and cool air that circulates the earth everyday. As demonstrated when talking about the mechanisms of precipitation we notice that everything is interconnected. One system of precipitation never works alone as there is always a contribution from warm and cool currents, relief and even the terrestrial heat of humans affects the way that rain eventually falls. This shows just how composite the earth's climate system is and explains why some areas of the world have high rainfall and why some areas are so dry and unaffected. ...read more.