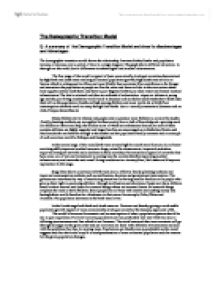 The Demographic Transition Model Q: A summary of the Demographic Transition Model and show its disadvantages and Advantages The demographic transition model shows the relationship between Births,Deaths and population increase or decrease over a period of time in a single diagram.The graph shows different situations in through out the world due to differences in technological and medical advancement. The first stage of the model is typical of least economically developed countries,charecterised by high birth and death rates resulting in minimal population growth.High death rates are due to famine which is widespread in Africa and most Middle East countries.War contributes to the hunger and starvation the population as people are flee the cities and farms to hide in the mountains where food supplies cannot reach them and there is poor hygiene facilities,no clean water and limited medical infrastructure.The diet is minimal and thus an outbreak of malnutrition wipes out infants at young age and the poor living conditions would result in diseases such as cholera and kwashiorkor which take their toll on the population .Deaths are high among children and most would ...read more.

Stage three shows a decrease in birth rates due to effective family planning methods and improved contraception methods such as sterilisation, abortion and government intervention. The government intervenes by way of introducing incentives for having smaller families or for people who give up their right to producing children through sterilisation and abortions. People now have children based on their income and desire for material things where an increased desire for material things surpasses the need to have children. Some people are too busy with careers and making money and having babies would therefore be a hindrance to their cause for example, Cuba, China and Australia.The population decreases as the birth rates lower. In the fourth stage both birth and death rates are fluctuate and thereby giving a much stable population growth typical of most economically developed countries like Canada, Japan and USA. The model is however Eurocentric and an assumption of what a population pattern should be due to past experience. However country populations are not predictable and vary with time due to differing circumstances and fate which is not foreseen. ...read more.

The model suggests centralised development and that it begins in European countries and that the rest of the world will follow through the same pattern. The demographic transition model like all models has its limitations and though not fully accurate, it can be used to show the population of a country within a period of time. It becomes more accurate when it is limited to a single country and the population trends are closely monitored and not a mere generalisation of facts. Instead of being used as a future pattern growth it could be used to compare the rates of growth between countries at a given point and time thereby giving truthful facts and figures which are more accurate and not fictional. The model however helps to plan for the future and help countries cope with future disasters by trying to predict and curb future tragedies . An analysis of such scale helps to understand the present by studying patterns of the past and it in helping to foretell the future. Studying population in its different aspects that is future, past and present can help to stabilise a country and improve situations as they occur. ...read more.

Overall rating: 3 out of 5 stars.
The report starts well with clear descriptions and explanations of each stage and the use of some examples. However, it falls down on the critique/evaluation that follows - which is actually the most important part of the report. It is not evident that the student fully understands the more technical points they are making as they are not integrated into the discussion or explained. Also, it seems the student is a little confused on the concept of a model as opposed to a graph of data for different countries. Some useful and appropriate points are made in support and against the model but overall it seems they can describe it, but may not fully understand its purpose and features fully.