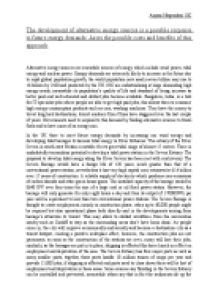 The development of alternative energy sources is a possible response to future energy demands. Assess the possible costs and benefits of this approach

﻿Anjana Magendran 13C The development of alternative energy sources is a possible response to future energy demands. a***s the possible costs and benefits of this approach Alternative energy sources are renewable sources of energy which include wind power, tidal energy and nuclear power. Energy demands are extremely likely to increase in the future due to rapid global population growth, the world population now nearly seven billion may rise to 16 billion by 2100 and predicted by the UN. NIC are industrialising at large demanding high energy needs, meanwhile its population?s quality of life and standard of living increase as better paid and well educated and skilled jobs become available. Bangalore, India; is a hub for IT specialist jobs where people are able to get high paid jobs, this allows them to consume high energy consumption products such as cars, washing machines. They have the money to travel long haul destinations, tourist numbers from China have staggered over the last couple of years. Governments need to respond to this demand by finding alternative sources to fossil fuels and to have more of an energy mix. In the UK there to meet future energy demands by increasing our wind energy and developing tidal barrages to harness tidal energy in River Estuaries. The estuary of the River Severn in south-west Britain is notable for its great tidal range of almost 15 metres. ...read more.

It could lead to physical changes at the estuary because of the reduced tidal range, as it affects the landscape morphology and the sedimentary processes. Salt marshes are estimated to be reduced by 40% and mudflats by 5%; transitional grassland will increase by 6%. The reduced tidal range and tidal currents upstream of the barrage would create safer conditions for sailing. This could lead to the developments of marinas, employment and housing to service the sailing sector. On the other hand, Bristol has plans for a new dock to handle the next generation of cargo ship of up to 130,000 tonnes and 16m draught. The reduced tidal range may pose problems for large vessels entering the port of Bristol itself; pumping might be required to raise vessels to the height of the water in the enclosed docks; a slow and expensive process. The barrage could be very hazardous to marine life in the sea hence environmentally unfriendly and unsustainable as it could affect breeding patterns of birds; there are five bird species of international importance and the barrage could affect them immensely. Marine life, such as fishes; salmon can be killed in the sluices and turbines, and discouraged from migrating by the presence of the barrage. The UK environmental Agency has predicted high mortality rates for salmon, sea trout and shad. ...read more.

Suitable sites for wind turbines are often in remote locations, distant from areas of demand for electricity. Thus there is an additional expense in connecting to the National Grid so the electricity can be distributed to the appropriate areas, and obtrusive pylons and power lines cross the countryside. Wind energy can bring wider economic benefits for a country. For example, there are an increasing number of companies around the UK involved in manufacturing turbine components and installing, operating and maintaining. Decommissioning of wind farms is straight forward and leaves no toxic waste residues or environmental damage; however wind turbines kill birds, especially at higher rotation speeds when the turbine blades can become invisible. In conclusion, the world cannot carry on as business as usual, the risks, impacts and danger is very high and could lead to the destruction of nations as they fight over the last resources of fossil fuel or are endangered by the impact of global warming. Thus an alternative energy source needs to acquired and put into use so that the world can function as normal without economic decline and standards of living falling, as well as to be able to look forward to a sustainable future, governments and nations need to look into diversifying their energy sources, a mix of renewable energy sources will help the country become independent of fossil fuels and can lead to a better sustainable future for the generations to come. ...read more.