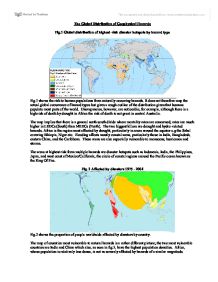 The Global Distribution of Geophysical Hazards

The Global Distribution of Geophysical Hazards Fig.1 Global distribution of highest-risk disaster hotspots by hazard type Fig.1 shows the risk to human populations from naturally occurring hazards. It does not therefore map the actual global occurrence of hazard types but gives a rough outline of the distribution given that humans populate most parts of the world. Discrepancies, however, are noticeable; for example, although there is a high risk of death by drought in Africa the risk of death is not great in central Australia. The map implies that there is a general north south divide where mortality rates are concerned; rates are much higher in LEDCs (South) than MEDCs (North). The two biggest killers are drought and hydro-related hazards. Africa is the region most affected by drought, particularly in areas around the equator e.g the Sahel covering Ethiopia, Niger etc. Flooding affects mostly coastal areas, particularly those in India, Bangladesh, eastern China, and the Caribbean. These areas are also especially vulnerable to monsoons, hurricanes and storms. The areas at highest risk from multiple hazards are disaster hotspots such as Indonesia, India, the Philippines, Japan, and west coast of Mexico/California; the circle of coastal regions around the Pacific ocean known as the Ring Of Fire. ...read more.

A small percentage of volcanoes occur on constructive margins, namely the North Atlantic ridge which produces gentle shield volcanoes. Volcanoes can also occur inside plate margins over areas called hotspots. One can see that Africa's volcanoes are mostly within the area of the plate, and are products of hotspots rather than plate collision. Fig 4 also shows the distribution of earthquake zones. Earthquakes can occur within any plate margin but there are three main fault lines between them that account for most of the world's volcanoes; the Western Pacific, the Eastern Pacific, and the Southern Eurasian. Of these the destructive boundaries of the Pacific plate account for the worst and most destructive earthquakes. This map clearly shows that the distribution of volcanoes follows the earthquake zones in America and East Asia. Roughly 2/3 of volcanoes therefore occur in earthquake zones. The 'middle' earthquake zone follows the boundaries between the southern Eurasian plate and the Iranian, Indo-Australian, and African plates. It is by far the most active earthquake zone on earth but does not have any volcanoes. Fig.5 Seismic risk Fig.5 gives more information about the risk of an earthquake occurring. One can see in both Figures 4 and 5 that although the pacific seismic zones are long and belt-like the area squeezed between the Arabian Peninsula and the Himalayas is both long and wide; Iran and Iraq are particularly badly afflicted. ...read more.

The second most severe volcano disaster in terms of human fatalities was in Cameroon which lies, like most of Africa's volcanoes, on a hotspot. Mt Cameroon is the largest and most frequently erupting volcano in Africa. Between 1975 and 2000, the volcano erupted 3 times. Indonesia boasts the largest concentration of active volcanoes (76!) of any country and has a relatively high mortality rate related to volcanoes. Between 1975 and 2000 Indonesia suffered volcano-related deaths in 9 out of the 26 years. It also has a recorded history of 1,171 eruptions which is only just exceeded by Japan with 1,274. Together, they share 1/3 of the world's recorded volcanic eruptions. In conclusion: I have shown that those countries with Pacific coastlines are at by far the highest risk from geophysical hazards. The subduction taking place around the Pacific rim causes both frequent earthquakes and frequent volcanic eruptions. By contrast the collision between the Eurasian plate and those colliding with it from the south is the cause of widely distributed earthquake-related hazards, affecting continental peoples more severely than elsewhere in the world. This area however has a relatively low occurrence of volcanic eruptions. Hydro-meteorological hazards remain, however, the most destructive of all natural disasters throughout the world. Of all human populations the Chinese nation is the worst affected by natural hazards, both geophysical and hydro-meteorological, in terms of sheer number. ...read more.