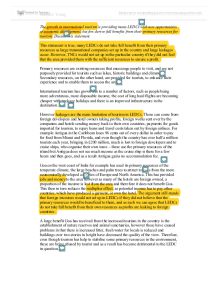 The growth in international tourism is providing many LEDCs with new opportunities of economic development, but few derive full benefits from their primary resources for tourism. Discuss this statement.

The growth in international tourism is providing many LEDCs with new opportunities of economic development, but few derive full benefits from their primary resources for tourism. Discuss this statement. This statement is true; many LEDCs do not take full benefit from their primary resources as large transnational companies set up in the country and large leakages occur. However, TNCs would not set up in the particular country if they did not feel that the area provided them with the sufficient resources to ensure a profit. Primary resources are existing resources that encourage people to visit, and are not purposely provided for tourists such as lakes, historic buildings and climate. Secondary resources, on the other hand, are provided for tourists, to enhance their experience and to enable them to access the area. International tourism has grown due to a number of factors, such as people being more adventurous, more disposable income, the cost of long haul flights are becoming cheaper with package holidays and there is an improved infrastructure in the destination. ...read more.

The argument still stands that foreign investors would not set up in LEDCs if they did not believe that the primary resources would be beneficial to them, and as such we can agree that LEDCs do not take full benefit from their own resources as profits are leaking to foreign countries. A large benefit Goa has received from the increased tourism in the country is the establishment of nature reserves and animal sanctuaries, however these have caused problems in that there is increased litter, fresh water for locals is reduced and buildings over two stories in height have decreased the quality of the view. Therefore, even though tourism has help to stabilise some primary resources in the environment, these are being abused by tourist and as a result has become detrimental to the LEDC in question. Kenya is another example of an LEDC who has developed tourism in order to provide new opportunities. ...read more.

Furthermore, the Masai are seen as a commercial enterprise, selling many good that have been manufactured in china, and consequently the multiplier effect is affected with large leakages. Also, many Masai children go to a boarding school, thus the culture and social history is lost causing one of Kenya's primary resources to be severely harboured. Although international tourism has developed dramatically in the last decade, many LEDCs who would earn vast amounts of income if they did not have foreign investors or had loans to repay, are losing out - their primary resources, the largest and most influential resources in a less developed country, are slowly becoming destroyed. Furthermore, with the destruction of these resources, the LEDC does not see large profits with leakages to foreign countries. Therefore we must conclude that the statement that many LEDCs do not derive full benefits from their primary resources for tourism is true, and it may even be possible to state that tourism is actually detrimental to the primary resources in an LEDC. Matthew Young ...read more.

This is a good answer to a difficult question. It is well structured and the author shows an understanding of the key terms such as "primary resources", and includes some of the key ideas which would be expected, especially "leakage". Some reference is made to other important ideas such as the "multiplier effect" but this could be extended. "Sustainability" could also be explored further. More facts and figures would also improve it.