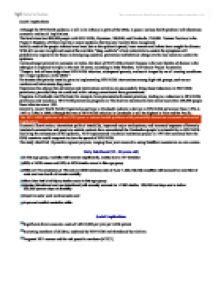 The HIV/AIDS epidemic in the GMS poses a serious health problem with potentially disastrous economic and social implications.

Social Implications Although the HIV/AIDS epidemic is still in its infancy in parts of the GMS, it poses a serious health problem with disastrous economic and social implications. Thailand alone has 800,000 people with HIV/AIDS; Myanmar, 500,000; and Cambodia, 250,000. Yunnan Province in the People's Republic of China also has a major epidemic that has only recently been recognized. Initially most of the people infected were men, but as the epidemic spread, more women and infants have caught the disease. With still no cure in sight and most of the available "drug cocktails" of anti-retrovirals to control the symptoms still prohibitively expensive for those in developing countries, prevention and behavior change are the key means to control the epidemic. Unless stronger preventive measures are taken, the share of HIV/AIDS-related illnesses in the total burden of disease in the subregion is expected to triple in the next 20 years, according to Indu Bhushan, ADB Senior Project Economist. "Despair, lack of knowledge about HIV/AIDS infection, widespread poverty, and social inequality are all creating conditions for a larger epidemic in the GMS." He stresses that priority must be given to implementing HIV/AIDS interventions among high-risk groups, such as sex workers and intravenous drug users. Experience has shown that prevention and intervention activities can successfully bring about reductions in HIV/AIDS prevalence, provided they are combined with a strong commitment from governments. Programs in Cambodia and Thailand, for example, have promoted safe sexual practices, leading to a reduction in HIV/AIDS prevalence and incidence. HIV/AIDS prevention programs in Thailand are estimated to have saved more than 200,000 people from infection since 1993. Similarly, recent World Health Organization surveys in Cambodia indicate a decline in HIV/AIDS prevalence from 3.9% in 1997 to 2.8% in 2000, although the rate of HIV/AIDS infection in Cambodia is still the highest in Asia and the Pacific. The HIV/AIDS epidemic in the GMS poses a serious health problem with potentially disastrous economic and social implications Economic liberalization, intermittent political instability, improved major road systems, and increased exposure of formerly insulated communities and people to outside contacts have exacerbated the Cambodian people's vulnerability to HIV/AIDS. ...read more.

the interface between formal and informal rural institutions, gender and HIV/AIDS as manifested in traditional social safety net mechanisms for women, such as widow inheritance, and the implications of the adverse effects of such practices for women. Labour: The heterogeneity of labour is highlighted as a critical factor in the analysis of the impact of the epidemic. Human rights, production and productivity issues, employment and labour market issues resulting from the impact of HIV/AIDS are examined in terms of their policy and programme development implications. More specifically: the role of the workplace in HIV prevention; lost skills and experience; the substitutability of labour; losses in production and rising payroll costs are analysed in the context of HIV/AIDS. Infrastructure: The implications of construction, maintenance and operation of rural infrastructure are examined in terms of their potential positive or negative contribution to the spread and impact of the epidemic. The impact of HIV/AIDS on rural housing, and thus on rural living conditions, is also examined. Participatory, gender-sensitive and multi-sectoral rural development policies and programmes are essential elements of any response to HIV/AIDS. The need to develop capacity-building strategies to improve the planning capabilities of agricultural and rural development institutions and to help them cope with the loss in human resources and other effects of the epidemic is underscored. Rural institutional strengthening and capacity-building activities that will also assist the case studies to generate policy and programme responses may include one or several of the following components of the menu of options proposed below: a) Rural development sector/sub-sector susceptibility/vulnerability assessment (why and how is a sector/sub-sector vulnerable to HIV/AIDS? which population/employee groups are most susceptible/ vulnerable? How do labour conditions facilitate HIV transmission? etc.) b) Human resource needs/capacity assessment of public and private rural development institutions, to evaluate the degree to which their policies and programmes are aligned with the effects of the epidemic and with the implications of human resource losses. ...read more.

TESTS AND TREATMENT Various blood tests now are used to detect HIV. The most frequently used test for detecting antibodies to HIV-1 is enzyme immunoassay. If it indicates the presence of antibodies, the blood is more definitively tested with the Western blot method. A test that measures directly the viral genes in the blood is helpful in assessing the efficacy of treatments. There is no cure for AIDS. Drugs such as AZT, ddI, and 3TC have proved effective in delaying the onset of symptoms in certain subsets of infected individuals. The addition of a protease inhibitor such as saquinovir or amprenavir, to AZT and 3TC has proved very effective, but the drug combination does not eliminate the virus from the body. A recently approved drug not in the protease inhibitor group, efavirenz (Sustiva), must be taken with protease inhibitors or older AIDS medicines. Opportunistic infections are treated with various antibiotics and antivirals, and patients with malignancies may undergo chemotherapy. These measures may prolong life or improve the quality of life, but drugs for AIDS treatment may also produce painful or debilitating side effects. Some 30 experimental AIDS vaccines have been developed and tested, but none has yet proved effective. The development of a successful vaccine against AIDS has been slowed because HIV mutates rapidly, causing it to become unrecognizable to the immune system, and because, unlike most viruses, HIV attacks and destroys essential components of the very immune system a vaccine is designed to stimulate. In 1998, however, authorization was given in the United States to begin the first full-scale testing of an AIDS vaccine, a process that was expected to take four years. Governments and the pharmaceutical industry continue to be under pressure from AIDS activists and the public in general to find a cure for AIDS. Attempts at prevention through teaching "safe sex" (i.e., the relatively safer sex accomplished by the use of condoms), sexual abstinence in high-risk situations, and the dangers to drug users of sharing needles have been impeded by those who feel that such education gives license to promiscuity and immoral behaviors. ...read more.